Influenza circulation by subregion in the Americas, January 2014–December 2020.10 Confirmed influenza cases, by week and subtype, and seasonal trends in five subregions of Latin America and the Caribbean, stratified by latitude. Greatest variation in seasonality is observed in Central America, the Caribbean, and Andes regions, with a more typical seasonal pattern observed in North and South America. All regions report a significant decrease in influenza cases in 2020. This figure appears in color at www.ajtmh.org.

Distribution of countries in the Americas by influenza vaccine formulation used, 2020. Map showing distribution of Northern and Southern Hemisphere vaccine formulation use in 2020. Insets show the details in countries and territories of Central America and the Caribbean. Source: Country reports through the PAHO-WHO/UNICEF Joint Reporting Form 202031 and PAHO Revolving Fund data for 2019–2020 Northern hemisphere and 2020 Southern hemisphere influenza seasons. This figure appears in color at www.ajtmh.org. 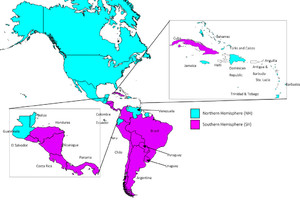 Each year in Latin America and the Caribbean, seasonal influenza is associated with an estimated 36,500 respiratory deaths and 400,000 hospitalizations. Since the 2009 influenza A(H1N1) pandemic, the Region has made significant advances in the prevention and control of seasonal influenza, including improved surveillance systems, burden estimates, and vaccination of at-risk groups. The Global Influenza Strategy 2019–2030 provides a framework to strengthen these advances. Against the backdrop of this new framework, the University of Colorado convened in October 2020 its Immunization Advisory Group of Experts to review and discuss current surveillance, prevention, and control strategies for seasonal influenza in Latin America and the Caribbean, also in the context of the COVID-19 pandemic. This review identified five areas for action and made recommendations specific to each area. The Region should continue its efforts to strengthen surveillance and impact evaluations. Existing data on disease burden, seasonality patterns, and vaccination effectiveness should be used to inform decision-making at the country level as well as advocacy efforts for programmatic resources. Regional and country strategic plans should be prepared and include specific targets for 2030. Existing investments in influenza prevention and control, including for immunization programs, should be optimized. Finally, regional partnerships, such as the regional networks for syndromic surveillance and vaccine effectiveness evaluation (SARInet and REVELAC-i), should continue to play a critical role in continuous learning and standardization by sharing experiences and best practices among countries.