Laboratory evidence of dengue among Peace Corps volunteers in Timor-Leste who sought medical care for acute febrile illness or suspicion of dengue during September 2018 to June 2019 (n = 20). This figure appears in color at www.ajtmh.org.

Overall participation of Peace Corps volunteers in a survey to identify factors associated with dengue virus infection, Timor-Leste, 2019. This figure appears in color at www.ajtmh.org.

Participation of Peace Corps volunteers identified through the medical records review in a survey to identify factors associated with dengue virus infection, Timor-Leste, 2019. This figure appears in color at www.ajtmh.org. 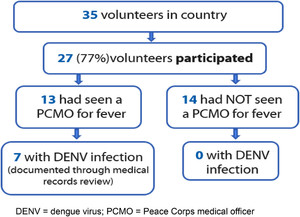 Dengue is an ongoing health risk for Peace Corps Volunteers (PCVs) working in the tropics. On May 2019, the Peace Corps Office of Health Services notified the Centers for Disease Control and Prevention (CDC) of a dengue outbreak among PCVs in Timor-Leste. The purpose of this investigation was to identify the clinical, demographic, and epidemiological characteristics of PCVs with dengue and recommend dengue preventive measures. To identify PCVs with dengue and describe disease severity, the medical records of PCVs reporting fever during September 2018–June 2019 were reviewed. To identify factors associated with dengue virus (DENV) infection, we administered a questionnaire on demographics, travel history, and mosquito avoidance behaviors and collected blood specimens to detect the anti-DENV IgM antibody to diagnose recent infection. Of 35 PCVs in-country, 11 (31%) tested positive for dengue (NS1, IgM, PCR), eight requiring hospitalization and medical evacuation. Among 27 (77%) PCVs who participated in the investigation, all reported having been recently bitten by mosquitoes and 56% reported being bitten most often at home; only 16 (59%) reported having screens on bedroom windows. Nearly all (93%) PCVs reported using a bed net every night; fewer (70%) reported using mosquito repellent at least once a day. No behaviors were significantly associated with DENV infection. Raising awareness of dengue risk among PCVs and continuing to encourage mosquito avoidance behavior to prevent dengue is critical. Access to and use of measures to avoid mosquito bites should be improved or implemented. Peace Corps medical officers should continue to receive an annual refresher training on dengue clinical management.