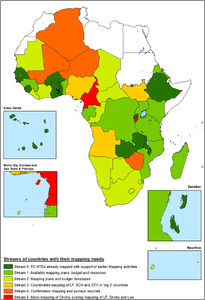 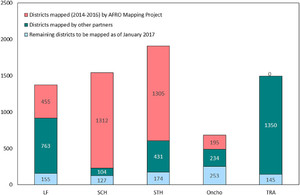 Mapping is a prerequisite for effective implementation of interventions against neglected tropical diseases (NTDs). Before the accelerated World Health Organization (WHO)/Regional Office for Africa (AFRO) NTD Mapping Project was initiated in 2014, mapping efforts in many countries were frequently carried out in an ad hoc and nonstandardized fashion. In 2013, there were at least 2,200 different districts (of the 4,851 districts in the WHO African region) that still required mapping, and in many of these districts, more than one disease needed to be mapped. During its 3-year duration from January 2014 through the end of 2016, the project carried out mapping surveys for one or more NTDs in at least 2,500 districts in 37 African countries. At the end of 2016, most (90%) of the 4,851 districts had completed the WHO-required mapping surveys for the five targeted Preventive Chemotherapy (PC)-NTDs, and the impact of this accelerated WHO/AFRO NTD Mapping Project proved to be much greater than just the detailed mapping results themselves. Indeed, the AFRO Mapping Project dramatically energized and empowered national NTD programs, attracted donor support for expanding these programs, and developed both a robust NTD mapping database and data portal. By clarifying the prevalence and burden of NTDs, the project provided not only the metrics and technical framework for guiding and tracking program implementation and success but also the research opportunities for developing improved diagnostic and epidemiologic sampling tools for all 5 PC-NTDs—lymphatic filariasis, onchocerciasis, schistosomiasis, soil-transmitted helminthiasis, and trachoma.