Study areas of the study, Brooke’s Point and Roxas.

Determinants of satisfaction with microscopists among their ex-patients. N = 48, CMIN = 15, df = 10.5, CFI = 1.000, RMSEA = 0.000. All relations and correlations were significant (P < 0.05). Factors of the microscopists are marked with “(M),” and factors of the ex-patients are marked with “(P).” Household wealth scale scores range from 1–8 points as follows, with one point each for the following: electricity, radio, television, refrigerator, bicycle, motorcycle, bike–car, and tin or cement wall. Ethnicity is calculated as follows: Tagalog is “1,” amalgamation of Tagalog is “2,” and other is “3.” CFI = comparative fit index; CMIN = chi-square; df = degrees of freedom; RMSEA = root mean square error of approximation. 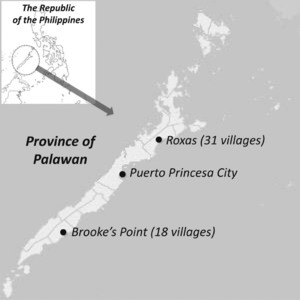 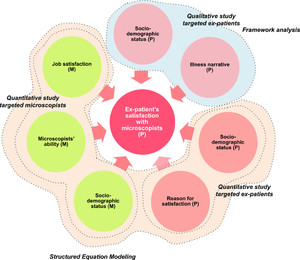 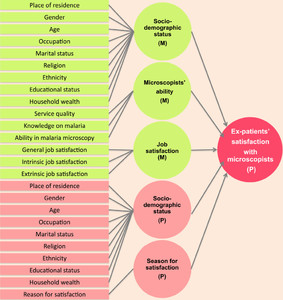 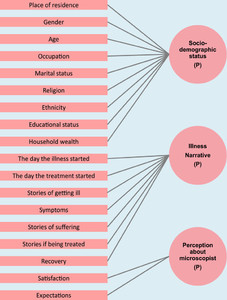 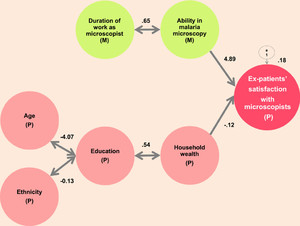 Satisfaction of Malaria Patients with Care by Community Health Workers Trained in Microscopy: A Mixed-Methods Study in Palawan, the Philippines

Palawan is the malaria-endemic province with the highest prevalence of malaria in the Philippines, and microscopists (community health workers) have been allowed to deliver early diagnosis and prompt treatment of malaria throughout the province since 1999. To improve the quality of care, the present mixed-methods study attempted to identify the factors associated with satisfaction of patients in Palawan with their microscopists by analyzing the patients’ perspectives. First, a quantitative cross-sectional study was conducted among 48 ex-patients and their nine microscopists. Ex-patients were asked about their satisfaction with care, and microscopists were asked about their job satisfaction and ability. Structural equation modeling was conducted for data analysis. Second, a qualitative cross-sectional study was performed using narrative interviews. Data were analyzed using the NVivo 10 software program. As a result, both studies revealed high patient satisfaction with microscopists. The quantitative study showed that ex-patients’ satisfaction with their microscopists was independently enhanced by two factors: high ability in malaria microscopic observation and low household wealth of the patients. Particularly, specific subpopulations (those with lower household wealth, relatively old people, and ethnic minorities) were more satisfied with the microscopists’ care. The qualitative study strengthens this finding by showing that their microscopists offered prompt and precise diagnosis and effective treatment for free. In conclusion, microscopists were shown to have an important role in narrowing the disparities in malaria care in Palawan. It is important to maintain/enhance the ability of microscopists in malaria microscopy to satisfy their patients.