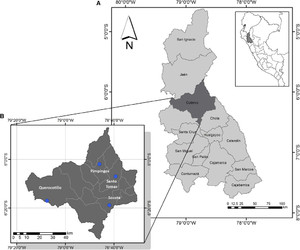 Molecular Detection of Bartonella bacilliformis in Lutzomyia maranonensis in Cajamarca, Peru: A New Potential Vector of Carrion’s Disease in Peru?

Carrion’s disease is a neglected, vector-borne illness that affects Colombia, Ecuador, and especially Peru. The phlebotomine sand flies Lutzomyia verrucarum and Lutzomyia peruensis are the main illness vectors described, although other species may be implicated in endemic areas such as some northern Peruvian regions, in which Carrion’s disease vector has not been established. The aim of this study was to evaluate the presence of Bartonella bacilliformis DNA in Lutzomyia maranonensis from Cajamarca, northern Peru. This sand fly has not been defined as a vector yet. Centers for Disease Control and Prevention light traps were used to collect adult phlebotomine sand flies from 2007 to 2008 in the Cajamarca department. Female specimens were identified using morphological keys and were grouped into pools of five sand flies, taking into account district and sampling site (intradomicile or peridomicile). DNA was extracted, and then conventional and real-time polymerase chain reaction (RT-PCR) were performed to detect B. bacilliformis and subsequently confirmed by sequencing. A total of 383 specimens of L. maranonensis species were analyzed. Two of 76 pools were positive for B. bacilliformis by sequencing; all positives pools were from Querocotillo district. In addition, Mesorhizobium spp. were identified in two pools of sand flies, which is an α-proteobacteria phylogenetically very close to B. bacilliformis. This study presents molecular evidence that suggests L. maranonensis is naturally infected by B. bacilliformis in the Cajamarca department. Further research should determine if L. maranonensis is a vector and could transmit B. bacilliformis.

Carrion’s disease is a vector-borne disease caused by the bacterium Bartonella bacilliformis and is considered a true neglected illness that not only affects the vulnerable populations in the Andean regions of Peru but has also been reported in Colombia and Ecuador.1,2 Carrion’s disease or bartonellosis is a biphasic illness with acute and chronic phases.1–3 In the acute, so-called Oroya fever, several unspecific symptoms are present, including anemia, jaundice, malaise, or fever, among others,4 which in the absence or delay of adequate treatment may lead to fatality rates as high as 88% due to high bacteremia, transient immunosuppression, and the presence of opportunistic infections.1–3 The distinctive trait of the chronic phase, so-called Peruvian wart, is a series of verrucous lesions due to an uncontrolled endothelial cell proliferation.3 There are around 40–50% of asymptomatic carriers in endemic areas who, in the absence of an animal reservoir, are considered the perpetuators of the disease.5

Peru has endemic areas with approximately 1.7 million at-risk inhabitants.1–3 Moreover, in the last few years, an expansion of this disease toward new areas has been reported.6 Classically, the distribution of the illness has been confined to the inter-Andean valleys, at 500–3,200 m of altitude.1 This distribution is mainly related to the ecology of the sand fly Lutzomyia spp. There are approximately 480 species of sand flies of the genus Lutzomyia, and 149 species have been described in Peru alone.7 Of these, two species have been incriminated as vectors of Carrion’s disease. Lutzomyia verrucarum is the main vector described in the highlands,3,4,8 and Lutzomyia peruensis, the presence of which has not only been mostly described in southern Peru9 but also in specific focalized regions of Inter-Andean valleys of central and northern Peru.10 However, a significant prevalence of Carrion’s disease has also been found in areas where L. verrucarum or L. peruensis is not present, indicating endemic conditions. It is hypothesized that other Lutzomyia species, present in these areas, could be vectors, such as Lutzomyia pescei, Lutzomyia robusta, Lutzomyia maranonensis, or Lutzomyia serrana.11,12 Nonetheless, none of these potential vectors has been confirmed to date. Indeed, vectors of Carrion’s disease need to be identified in the northern department of Cajamarca, where it is ranked third in probable cases reported.13 In Cajamarca, as well as in the neighboring Amazonas department of Peru, L. maranonensis is considered a potential vector of Carrion’s disease. Lutzomyia maranonensis was among the most frequently captured species in Cajamarca and Amazonas.11 Moreover, L. maranonensis presented a higher anthropophilic indoor behavior than other sand fly species. Therefore, L. maranonensis is adapted to peridomiciliary environments and is most frequently captured when using human bait capture.11

These gaps in knowledge are of special concern to understand both the epidemiology and the potential for dissemination of the disease, as well as to define potential disease control actions and its future elimination.4 Thus, the aim of this study was to evaluate the presence of B. bacilliformis DNA in populations of L. maranonensis from Cutervo Province in the Cajamarca department, northern Peru, to define if this sand fly species could be a potential vector of Carrion’s disease.

Lutzomyia maranonensis specimens were captured from December 2007 to February 2008 at four sampling sites in Cutervo Province (Cajamarca department, northern Peruvian highlands): Coro Alto (1,871 m), Sucse (1,971 m), El Laurel (1,422 m), and Succha (2,143 m), belonging to the Querocotillo, Socota, Pimpingos, and Santo Tomas districts, respectively (Figure 1). Cutervo is located on the eastern slopes of the Andean mountains. It has a semidry, temperate climate. The average maximum annual temperature is 22°C, with a minimum of 5°C. The rainy season usually starts in November and ends in April.14

Sand flies were captured and stored by Abraham Cáceres of the Entomology Laboratory of Tropical Medicine Institute of Universidad Nacional Mayor de San Marcos. Specimens were captured with CDC light traps installed in a number of intradomicile (Querocotillo, Socota, and Pimpingos) or peridomicile (Santo Tomas) locations. The sand flies were morphologically identified based on measurements of the delta portion of wing, spermatheca, and cibarium under stereomicroscopy.15 Once dissected, pools of up to five female sand flies from each site that had been identified and confirmed as L. maranonensis species were separated, stored in tubes, and sent to the Molecular Laboratory of the Universidad Peruana de Ciencias Aplicadas. Then, the pools were immersed in 70% ethanol and stored at −20°C, until molecular testing.

Sand fly pools were crushed, and the DNA was extracted using the DNeasy Blood and Tissue Kit (Qiagen, Hilden, Germany) according to the manufacturer’s instructions except that the final elution volume was 100 μL. The samples were stored at 4°C until used, being thereafter stored at −20°C.

Prokaryotic ribosome RNA primers, targeting the 16S rRNA gene, were used. These primers can detect positive Bartonella spp. samples by amplifying a conserved 438-bp fragment.16 All samples were run in duplicate. The B. bacilliformis collection strain (CIP 57.19, NCTC 12135) was used as the positive control, whereas a PCR reaction without template DNA was used as the negative control.

Previously described RT-PCR targeting the 16-23S intergenic transcribed spacer region of B. bacilliformis was used, according to Dong-Mei et al.17 Briefly, RT-PCR conditions were 95°C for 15 minutes, 50 cycles of 20 seconds at 95°C, 30 seconds at 60°C, and 15 seconds at 72°C. Each reaction contained 5 μL of template DNA and 15 μL of RT-PCR master mix including 1 μL (10 µM of each primer and 1.2 μL (10 µM) of Taqman probe. The controls were the same as conventional PCR analysis.

A total of 383 sand flies morphologically identified as L. maranonensis females were analyzed in 76 pools of up to five individuals each. Most sand flies were from Querocotillo (53.5%), followed by Pimpingos (29.0%), Santo Tomas (9.1%), and Socota (8.4%). Twelve pools (15.8%) were positive, by either conventional PCR (8, 10.5%) or RT-PCR (7, 9.2%), respectively. Three pools were positive by both conventional PCR and RT-PCR, and two of them were also positive for B. bacilliformis when sequenced (2.6%, 95% CI: 0.3–9.2%) (Table 1). The sequences showed a 100% identity with the 16S rRNA gene of B. bacilliformis (GenBank accession number CP014012.2). In addition, five pools were positive by conventional PCR but negative by RT-PCR, and the sequences of two pools detected the presence of Mesorhizobium spp. (GenBank accession number KY653035.1). This suggests that false-positive results are possible by PCR (Table 2).

Positive pools for any of the methodologies used

Multiple areas of Peru, Ecuador, and Colombia present endemic or even sporadic periodic transmission of B. bacilliformis in the absence of known vectors. It has been hypothesized that in addition to L. maranonensis, other Lutzomyia species are probably involved in disease transmission. In Peru, L. pescei was found during outbreaks in Cusco, and L. serrana accounted for 94% of sand flies collected during an outbreak in a high jungle area of Huánuco.12 In addition, in an endemic region of northeastern Marañon, where known vectors were not reported, L. robusta and L. maranonensis accounted for 58% and 32% of all sand flies collected, respectively.11 In Ecuador, L. maranonensis has not only been previously described mainly in the Andean region (94.1%), bordering San Ignacio Province, one of the most relevant Peruvian areas of endemicity for Carrion’s disease, but also in Amazonian and Coastal regions (5.3% and 0.6%, respectively).19 Meanwhile, Lutzomyia columbiana and L. serrana could be potential vectors in endemic Colombian areas, where during the last decades, only sporadic cases have been reported.20,21 However, the presence of L. robusta, L. serrana, and L. maranonensis in Carrion’s disease–free areas could be considered as a risk factor which may lead to the introduction of the illness into these areas.

The conventional PCR assay used in this study was designed to detect Bartonella genus DNA but is also able to amplify phylogenetically related microorganisms such as Brucella spp.22 The conventional PCR detection of Mesorhizobium spp., nitrogen-fixing bacteria belonging to the order Rhizobiales, in L. maranonensis is not surprising. These microorganisms are closely related to Bartonella spp. and they have been found in the guts of different insects, including members of the Lutzomyia genus23–25 and blood-feeding invertebrates.26,27 Sand flies are known to be plant feeders, in addition to blood feeding during oviposition, and, for that reason, could obtain plant phyllosphere microbiota detectable with molecular and traditional bacteriological methods.26,27 In addition, the presence of other described/undescribed Bartonella spp., either pathogenic or not, cannot be ruled out. These data highlight the importance to accurately determine the presence of potential pathogens in vector-determining studies to avoid misidentifications.

The rate of B. bacilliformis sequencing confirmed in sand fly infection in our study was 0.52. Also, the individual positive rate in Querocotillo district was 0.98, similar to the value of 1.0 rate for L. peruensis in 1999.9 These results suggest that L. maranonensis could be an efficient vector similar to L. peruensis, but it is necessary to conduct further studies to validate this suggestion.

The lack of data regarding blood meal status of sand flies used in this study also needs to be considered, and it is an important limitation of the study. Because female sand flies can contain B. bacilliformis DNA after they have completed at least one blood meal, we cannot affirm whether the sand flies were infected or only fed from an infected source. Despite other limitations, such as a small sample size and a specific geographical study area, we were able to demonstrate the presence of B. bacilliformis DNA in L. maranonensis.

In summary, we show the presence of B. bacilliformis DNA in L. maranonensis, expanding the number of Lutzomyia species that could potentially transmit B. bacilliformis. Validation of this finding may explain the endemic presence of bartonellosis in certain areas of northern Peru and Ecuador, where known Lutzomyia vectors are absent.