Histopathologic findings from the small bowel showed areas of (A) severe inflammation with abundant eosinophils and lymphocytes (H&E ×40). (B and C) Eosinophilic and lymphocytic inflammation surrounding larvae morphologically consistent with anisakidosis (H&E ×40 and ×200).

Image of a white, slender, 1.5-cm worm morphological consistent with Anisakis spp., passed in the stool of one family member after treatment with albendazole. 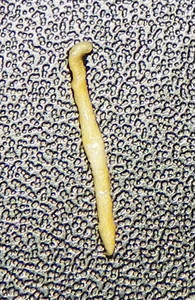 Case Report: A Common Source Outbreak of Anisakidosis in the United States and Postexposure Prophylaxis of Family Collaterals

We present a case of intussusception with complete small bowel obstruction caused by intestinal anisakidosis requiring surgical resection. A 30-year-old man presented with acute onset of severe abdominal pain 3 days after eating home-cured salmon gravlax. Despite surgery, the patient developed recurrent abdominal pain on two occasions with evidence of continued inflammation proximal to the surgical anastomosis. He was then treated with albendazole and prednisone, and symptoms improved. A decision was made to prophylactically treat two asymptomatic family members who also consumed home-cured gravlax with albendazole, resulting in one individual passing an intact Anisakis worm in her stool. We suggest that albendazole therapy could be considered as a therapy for continued symptoms of anisakidosis and postexposure prophylaxis of Anisakis larvae ingestion from a common source.

Anisakidosis is a human parasitic infection of the gastrointestinal tract. It is caused by the consumption of raw or inadequately cooked seafood containing nematode larvae of the family Anisakidae. On ingestion, Anisakis larvae can invade the gastrointestinal mucosa causing inflammation and thickening which can be complicated by small bowel obstruction, granuloma, and perforation.1,2 Symptoms may occur within hours or up to 2 weeks after ingestion of raw or undercooked seafood and can persist for months. During gastric anisakidosis, invasion of the gastric mucosa causes severe epigastric pain and vomiting, whereas intestinal invasion can cause acute onset abdominal pain with or without nausea, vomiting, and diarrhea. In chronic infections, individuals can complain of intermittent feelings of ill health and abdominal pain, lasting from several weeks to months.3 In gastric anisakidosis, endoscopy is both diagnostic, with larvae visually attached to the gastric mucosa with surrounding inflammation, and curative if the worm is removed. The diagnosis and treatment of enteric anisakidosis are more difficult. Surgery may be required for intestinal or extraintestinal infections that cause obstruction, appendicitis, or peritonitis. Albendazole is active against Anisakis simplex in vitro and in vivo against larvae in a guinea pig model.4 In addition, albendazole (400–800 mg daily for 6–21 days) treatment has been associated with therapeutic benefit in symptomatic individuals with presumptive enteric anisakidosis.5–8 However, the use of albendazole for postexposure prophylaxis of asymptomatic individuals has not been reported.

A 30-year-old previously healthy man presented to the emergency department complaining of 2 days of intermittent progressive midepigastric abdominal pain. The pain was described as severe, sharp, non-radiating, and associated with nausea and vomiting but without diarrhea. The patient first noted moderate intensity abdominal pain starting hours after ingesting home-cured salmon gravlax at a family dinner. This pain resolved spontaneously overnight but recurred the following day after he consumed more gravlax. His pain continued to worsen overnight, and the patient presented to the emergency room the following day. On presentation, he was afebrile and hemodynamically stable. His abdomen was diffusely tender in both upper quadrants but without rebound tenderness or guarding.

Laboratory studies were notable for a white blood count of 12,000/mm3 (normal range 4,000–10,000/mm3), with 89% neutrophils (normal range 34–71%) and 1% eosinophils. computed tomography (CT) imaging of the abdomen showed proximal collapse of small bowel with distal dilation and high-grade obstruction with transition point. The patient was taken to the operating room for an emergent exploratory laparotomy. An intussusception with granulomatous lead point was identified in the mid-ileum, and a small bowel resection with primary anastomosis was performed.

The patient’s abdominal pain and leukocytosis resolved following surgery but recurred abruptly 12 days postoperatively. He was readmitted with severe epigastric abdominal pain but was afebrile and hemodynamically stable similar to his initial presentation. His pain did not localize to his healing surgical site, which appeared clean, intact, and non-inflamed. His white blood count was 12,900 (normal range 4,000–10,000/mm3), with 81% neutrophils (normal range 34–71%). Out of concern for retained embedded larvae in the small intestine, the patient was treated with albendazole 400 mg by mouth twice a day.7,8 He improved clinically, the leukocytosis resolved, and he was discharged with a plan to complete 6 days of albendazole as an outpatient. The day after completing his therapy, he developed acute onset severe periumbilical abdominal pain without nausea or vomiting. On presentation to the emergency department, he was afebrile and vital signs were normal. A CT abdomen showed segmental inflammation/enteritis proximal to the anastomosis. Thus, he was restarted on albendazole 400 mg BID for an additional 10 days, with the addition of prednisone 20 mg daily for 5 days. The patient completed albendazole and prednisone therapy without complications and has remained symptom free.

In addition to the patient, two other family members consumed the home-cured salmon gravlax that was the suspected source of Anisakis larvae. Although asymptomatic, they both described feeling the sensation of wriggling in their esophagus as they consumed the gravlax. They were very concerned about developing intestinal disease, given the severity of the patient’s disease and need for surgical intervention. The family members were given 3-day courses of albendazole (400 mg BID). Both individuals completed treatment without side effects. After initiation of albendazole, one individual passed a 1.5-cm intact round worm consistent with Anisakis sp. in the stool (Figure 2). Both individuals remained asymptomatic after completing the therapy.

Intestinal anisakidosis is acquired following the ingestion of raw or inadequately prepared fish or squid. It is very likely that our patient and his family member were infected with Anisakis larvae after eating home-cured salmon gravlax. Using fresh wild sockeye salmon (Oncorhynchus nerka) purchased from a warehouse club, our patient marinated the fish in a salt and sugar brine solution for 48 hours before consumption. Pacific salmon have been implicated in the transmission of Anisakis sp. to humans. One study of 50 wild sockeye salmon caught during their spawning migration revealed that 100% were infected with larval A. simplex.9–11 Although salting fish can kill anisakid larvae, this requires high salt concentrations for prolonged periods of at least 5–6 weeks for all larvae to be killed.12 Larvae can also be killed by heating to temperatures of > 60°C (> 140°F) for at least 1 minute. To kill parasites in seafood, the U.S. Food and Drug Administration recommends cooking to an internal temperature of at least 145°F, freezing at −20°C for at least 7 days, or flash freezing at −35°C until solid for at least 15 hours.13

Our patient developed postsurgical recurrence of abdominal pain and leukocytosis. This raised the concern that embedded larvae still remained in sections of the small intestine. Although surgical removal of the larvae can be definitive treatment of anisakidosis, pharmacologic therapy with albendazole or steroids may lead to clinical resolution in cases of intestinal anisakidosis without surgical intervention.5–8,14 Albendazole is a broad-spectrum anthelminthic agent that inhibits tubulin polymerization and the microtubule-dependent uptake of glucose.15 Based on its clinical efficacy in the treatment of many intestinal and tissue nematodes, and its activity against Anisakis larvae in preclinical models, albendazole could be an effective therapy for anisakidosis.4,16 To date, a small number of reports suggest that albendazole provides therapeutic benefit in symptomatic individuals with presumptive enteric anisakidosis.5–8 Besides albendazole, Ramos et al.14 reported a series of five patients presenting with acute intestinal anisakidosis with segmental intestinal obstruction on CT in Spain who were treated nonoperatively with 6-methylprednisolone (1 mg/kg/24 hours) for 5 days. All of these patients had clinical and radiographic disease resolution without adverse reactions. It is thought that burrowing or dead Anisakis larvae causes an intense Th2 immune response with eosinophils and lymphocytes infiltrating the mucosa and submucosa.5 Corticosteroids could theoretically be beneficial in cases of intestinal anisakidosis because of their anti-inflammatory effects and because they may aid in the resolution of bowel obstruction.17 In our patient, a short course of albendazole was prescribed for postoperative recurrence of abdominal pain. After an initial response, the patient relapsed after albendazole completion and represented with evidence of intestinal inflammation on CT imaging. Because of his persistent symptoms and radiographic findings, we opted to extend the duration of albendazole treatment and add oral prednisone at 20 mg daily for 5 days. The patient’s symptoms resolved completely without adverse events on this therapy.

To our knowledge, no previous report has discussed prophylactic therapy in asymptomatic individuals following common source exposure to Anisakis larvae. Given the high likelihood of exposure and the beneficial safety profile of albendazole, we ultimately decided to prescribe a 3-day course of albendazole at 400 mg BID to two family members who also consumed the salmon gravlax. Although we cannot know if the treatment prevented the development of clinical disease, it is likely that it had the intended antiparasitic effect as evidenced by the passage of an intact worm. Based on this case, we suggest that albendazole therapy could be considered postexposure prophylaxis for known or suspected common source exposure to Anisakis spp. larvae.