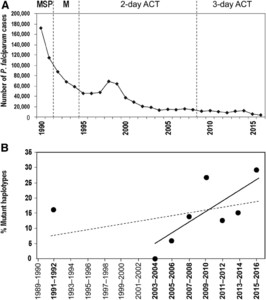 Mutations in the chloroquine resistance transporter gene of Plasmodium falciparum (Pfcrt) are associated with drug susceptibility status of chloroquine and other antimalarials that interfere with heme detoxification process including artemisinin. We aim to investigate whether an increase in duration of artemisinin combination therapy (ACT) in Thailand could affect mutations in Pfcrt. The complete coding sequences of Pfcrt and dihydrofolate reductase (Pfdhfr), and size polymorphisms of the merozoite surface proteins-1 and 2 (Pfmsp-1 and Pfmsp-2) of 189 P. falciparum isolates collected during 1991 and 2016 were analyzed. In total, 12 novel amino acid substitutions and 13 novel PfCRT haplotypes were identified. The most prevalent haplotype belonged to the Dd2 sequence and no wild type was found. A significant positive correlation between the frequency of Pfcrt mutants and the year of sample collection was observed during nationwide ACT implementation (r = 0.780; P = 0.038). The number of haplotypes and nucleotide diversity of isolates collected during 3-day ACT (2009–2016) significantly outnumbered those collected before this treatment regimen. Positive Darwinian selection occurred in the transmembrane domains only among isolates collected during 3-day ACT but not among those collected before this period. No remarkable change was observed in the molecular indices for other loci analyzed when similar comparisons were performed. An increase in the duration of artesunate in combination therapy in Thailand could exert selective pressure on the Pfcrt locus, resulting in emergence of novel variants. The impact of these novel haplotypes on antimalarial susceptibilities requires further study.