Analytic framework for the predicting risk of imported disease with demographics (PRIDD) method. This framework depicts the analytic approach for exploring the relationship between community-level independent sociodemographic and health service factors with malaria case burden. The potential for confounding of this relationship by other behavioral, cultural, environmental, and situational factors is indicated by the broken line to the oval component demonstrating examples of potential confounders which are not controlled for using the PRIDD method with American Community Survey data because of availability of variables in used datasets. 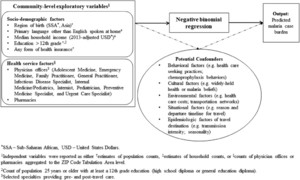 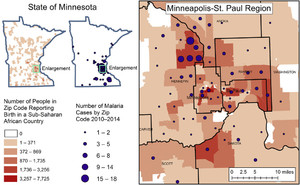 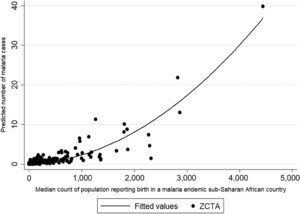 Although immigrants who visit friends and relatives (VFRs) account for most of the travel-acquired malaria cases in the United States, there is limited evidence on community-level risk factors and best practices for prevention appropriate for various VFR groups. Using 2010–2014 malaria case reports, sociodemographic census data, and health services data, we explored and mapped community-level characteristics to understand who is at risk and where imported malaria infections occur in Minnesota. We examined associations with malaria incidence using Poisson and negative binomial regression. Overall, mean incidence was 0.4 cases per 1,000 sub-Saharan African (SSA)–born in communities reporting malaria, with cases concentrated in two areas of Minneapolis–St. Paul. We found moderate and positive associations between imported malaria and counts of SSA- and Asian-born populations, respectively. Our findings may inform future studies to understand the knowledge, attitudes, and practices of VFR travelers and facilitate and focus intervention strategies to reduce imported malaria in the United States.