Percentage of children in control schools able to describe So5 campaign, relative to the distance (m) of their school to the nearest intervention school. Note that these children went to 23 different schools (N = 4 schools in the shortest, N = 15 in the middle, and N = 4 schools in the longest distance category). 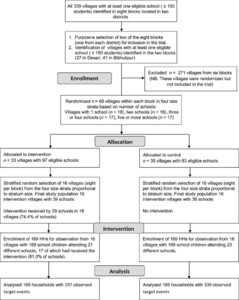 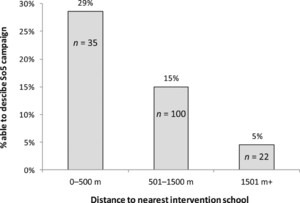 Changing hand hygiene behavior at scale in the community remains a challenge. The objective of this study was to estimate the effect of Unilever’s school-based “School of 5” handwashing campaign on handwashing with soap (HWWS) in schoolchildren and their mothers in the Indian state of Bihar. We conducted a cluster-randomized trial in two districts. We randomized a total of 32 villages with at least one eligible school to intervention and control groups (1:1) and recruited 338 households in each group for outcome measurement. We used structured observation in households to measure HWWS at target occasions (after defecation, soap use during bathing, and before each main meal) in schoolchildren and their mothers. Observers were blinded to intervention status. We observed 636 target occasions (297 in the intervention arm and 339 in the control arm) in mothers and school-going children. After the intervention, HWWS prevalence at target occasions was 22.4% in the control arm and 26.6% in the intervention arm (prevalence difference +4.4%, 95% confidence interval: −4.0, 12.8). The difference was similar in children and mothers. Observers appeared to be adequately blinded to intervention status, whereas observed households were successfully kept unaware of the purpose of observations. To conclude, we found no evidence for a health-relevant effect of the School of 5 intervention on HWWS in schoolchildren and their mothers. Qualitative research suggested that reasons for the low impact of the intervention included low campaign intensity, ineffective delivery, and a model possibly not well tailored to these challenging physical and social environments.