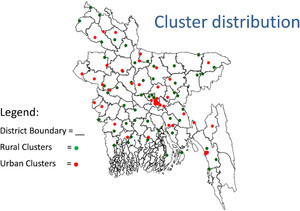 We conducted a nationally representative cross-sectional study of 875 health-care facilities (HCFs) to determine water, sanitation, and health-care waste disposal service levels in Bangladesh for doctors, staff, and patients/caregivers in 2013. We calculated proportions and prevalence ratios to compare urban versus rural and government versus other HCFs. We report World Health Organization (WHO)-defined basic HCF service levels. The most common HCF was nongovernmental private (80%, 698/875), with an average of 25 beds and 12 admissions per day. There was an improved water source inside the HCF for doctors (79%, 95% confidence intervals [CI]: 75, 82), staff (59%, 95% CI: 55, 64), and patients/caregivers (59%, 95% CI: 55, 63). Improved toilets for doctors (81%, 95% CI: 78, 85) and other staff (73%, 95% CI: 70, 77) were more common than for patients/caregivers (54%, 95% CI: 50, 58). Forty-three percentage (434/875) of HCFs had no disposal method for health-care waste. More urban than rural and more government than other HCFs had an improved water source on the premises and improved toilets for staff. WHO-defined basic service levels were detected in > 90% of HCFs for drinking water, among 46–77% for sanitation, and 68% for handwashing at point of care but 26% near toilets. Forty-seven percentage of HCFs attained basic health-care waste management service levels. Patient/caregiver access to water, sanitation, and hygiene facilities is inadequate in many HCFs across Bangladesh. Improving facilities for this group should be an integral part of accreditation.