Phylogenetic reconstruction of the FL0117 cluster. Nodes represent each of the sequenced cases (N = 21). Gray identifies the foreign-born cases and cyan identifies the U.S.-born cases. Yellow outline identifies central nodes. The numbers on the branches represent single nucleotide variant between pairs of isolates.

Reconstruction of inmates initial entry into the prison system and recorded movements before tuberculosis (TB) diagnosis. Year of entry into the prison system for each inmate (A–X) is given on the x axis. Each green box represents a year into their prison term with a change in color indicating movement from their current location to Facility C (yellow) or the main receiving/hospital facility (gray). The dashed box highlights the year the first TB cases were reported, 2009. TST = tuberculin skin test as an indication of TB infection status. Cases D (FL13) and B (FL15) were sequenced. 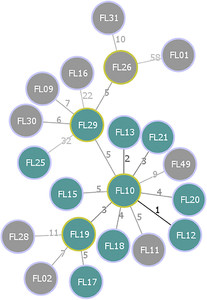 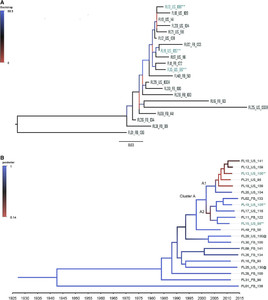 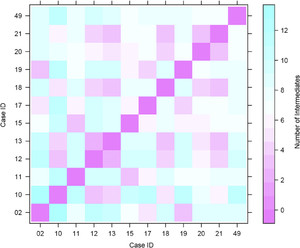 We used whole-genome sequencing to investigate a tuberculosis outbreak involving U.S.-born persons in the prison system and both U.S.- and foreign-born persons in the community in Florida over a 7-year period (2009–2015). Genotyping by spacer oligonucleotide typing and 24-locus mycobacterial interspersed repetitive unit-variable number tandem repeat suggested that the outbreak might be clonal in origin. However, contact tracing could not link the two populations. Through a multidisciplinary approach, we showed that the cluster involved distinct bacterial transmission networks segregated by country of birth. The source strain is of foreign origin and circulated in the local Florida community for more than 20 years before introduction into the prison system. We also identified novel transmission links involving foreign and U.S.-born cases not discovered during contact investigation. Our data highlight the potential for spread of strains originating from outside the United States into U.S. “high-risk” populations, such as prisoners, with subsequent movement back to the general community.