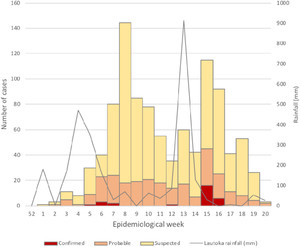 Severe flooding has been linked to outbreaks of leptospirosis. Two sequential extreme flood events in Western Fiji caused the largest outbreak of leptospirosis recorded in the South Pacific, with 1,217 total suspected cases, of which 314 were probable and confirmed. Most (83%) cases occurred within 6 weeks of the flood events, displaying a biphasic epidemic curve associated with the floods. Given the temporal proximity of cases to flooding events, most of the transmission appeared to occur during or immediately after the floods; therefore, prevention of exposure to contaminated environments is a priority in the immediate flood and post-flood period. In addition, genotyping studies suggest that multiple animal reservoirs were implicated in the outbreak, reaffirming the importance of integrated human and animal health strategies for leptospirosis control.

Severe flooding has been linked to outbreaks of leptospirosis.1–5 During January and March 2012, successive tropical depressions caused two severe flooding events in Western Fiji, leading to the largest outbreak of leptospirosis reported in the Pacific region. A total of 44 reported deaths and several hundred cases were attributed to the outbreak. Leptospirosis was first reported in Fiji in 1952 and is one of seven priority national notifiable diseases.6,7 The estimated incidence is 20–100 cases per 100,000 per year, considered high when compared with other Asia-Pacific countries.8–10 Transmission is seasonal with peak case-reporting between February and June, largely corresponding to the rainy season (January to April).10 To better understand the epidemiology of the outbreak in 2012, including the spatial and temporal features of transmission in relationship to precipitation, we conducted a retrospective outbreak investigation in the Western division of Fiji (population 340,000),11 the region most severely affected by the flooding events.

We included individuals who 1) sought medical care in the Western Division between December 28, 2011 and May 17, 2012 (21 weeks), 2) the treating clinician suspected leptospirosis, and 3) provided biological samples for testing. Cases were classified as flood associated if they sought medical care 2–6 weeks after the flooding events, or not flood associated if they sought medical care outside this period. The date of health-care visit was based on the date of sample collection at the health-care facilities where patients sought medical care. If the date of health care visit was not reported, we used the date of sample arrival at the Fiji Center for Communicable Diseases Control (FCCDC) minus the average interval in days from sample collection to arrival at the FCCDC (for all samples in the study cohort that included this information). The definition of flood associated was based on prior studies demonstrating an increase in leptospirosis cases approximately 2 weeks after flooding and persisting for several weeks thereafter.1,12–16 We extracted demographic and laboratory data from the FCCDC national leptospirosis database. Rainfall data were obtained from the Fiji Meteorological Service and the National Oceanic and Atmospheric Administration.17,18

This study describes the largest outbreak of leptospirosis reported in the South Pacific. The number of laboratory-confirmed and probable cases that were identified may underestimate the overall burden attributable to the outbreak. Key findings are as follows: 1) most of the cases were identified within 6 weeks after the flood events, indicating most exposures occurred during or shortly after the floods, with notable implications for public health interventions, and 2) multiple animal reservoirs likely contributed to the outbreak, indicating that a variety of control interventions would be necessary to interrupt transmission. The large number of suspected leptospirosis cases reported, including specimen submission and diagnostic testing, may be in part due to enhanced outbreak response activities. In March 2012, the Fiji Ministry of Health and Medical Services (MHMSs) and the World Health Organization (WHO) conducted training seminars for clinicians in the affected areas on the identification and management of leptospirosis. In addition to recommending presumptive treatment of clinically suspected cases, clinicians were encouraged to submit samples for testing if they suspected leptospirosis. The MHMS also formed the National Taskforce for the Control of Outbreak Prone Diseases to monitor outbreak progression and provide technical guidance for control and prevention of leptospirosis. Health promotion activities such as radio messaging were conducted in affected areas to raise public awareness on the prevention of leptospirosis. A study limitation was the low number of probable and confirmed cases. However, given the poor sensitivity of anti-Leptospira IgM ELISA in the first 5–7 days of illness,24 and given that only a small proportion of samples (18%) were tested by PCR, additional cases would likely have been confirmed if comprehensive testing had been implemented.

A 2012 study reported that most patients in Fiji with undifferentiated fever seek health care within the first several days of illness (median 3 days [IQR 1–5]) (MHMS/WHO, unpublished), when anti-Leptospira IgM ELISA and MAT are unlikely to be positive. Because of the intermittent availability of leptospirosis testing protocols and reagents before the 2012 outbreak, the reported baseline incidence of leptospirosis may be less reliable than if we had more consistent historical data; however, we are confident that this was a large leptospirosis outbreak, given that 1) the weekly incidence was more than 3-fold higher during the post-flood period, 2) the qPCR positivity rate was more than 4-fold higher post-flood, 3) all eight fatal cases with autopsy tissue available were confirmed as leptospirosis by immunohistochemistry, 4) the biphasic epidemic curve paralleled the successive flood events (Figure 1), and 5) multiple hospitals in the Western Division reported abnormally high rates of severe disease and deaths (mostly due to pulmonary hemorrhage) among patients with clinically suspected leptospirosis during the post-flood periods (M. Kama, E. J. Nilles, unpublished data).

Given their unique geographic and demographic characteristics, the Pacific island region is among the most vulnerable globally, and the impact of extreme weather events leading to epidemics of infectious diseases has been identified as a high-priority public health threat to the region.25,26 Countries, including those in the Pacific, that are susceptible to extreme weather events such as flooding are encouraged to strengthen emergency surveillance and response capacities—in line with the International Health Regulations (2005)27—to rapidly detect and control infectious disease outbreaks. This study builds on the limited body of literature characterizing the epidemiology of leptospirosis outbreaks in these settings and aims to better inform policy-makers and control programs on prevention and control priorities after flooding events. Given that most transmission occurs during or immediately post-flood, investing limited public health resources in source reduction after flooding may not be effective, and avoidance or barrier protection to prevent exposure to contaminated environments should be a public health priority. The implication that multiple animal reservoirs were likely involved in this outbreak reaffirms the importance of integrated human, animal, and environmental health strategies for leptospirosis control.