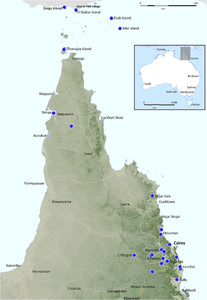 Chromobacterium violaceum in Northern Australia: A Sheep in Wolf’s Clothing?

In many parts of the world, the case-fatality rate of Chromobacterium violaceum infection approaches 60%. To evaluate the spectrum of disease associated with C. violaceum in Far North Queensland (FNQ), Australia, we reviewed all culture-confirmed isolates from 1997 to 2017. There were 28 isolates, 15 represented infection, 11 were contaminants, and two charts were destroyed preventing detailed evaluation of these cases. The most common sites of infection were the skin and soft tissue and the urinary tract; there were two cases of bacteremia without focus. There were no deaths attributable to C. violaceum during the study period and only two cases required intensive care unit support, although in both patients this was not for the C. violaceum infection, but for the management of other health issues. Globally, C. violaceum has a reputation as a deadly pathogen, but in FNQ, Australia, infections usually follow a relatively benign course.

Chromobacterium violaceum is an environmental, Gram-negative bacterium found in tropical and subtropical regions. Fewer than 200 cases have been reported in the literature, but infections are often life-threatening.1–4 In the United States, the case-fatality rate is up to 60%,2,5 with individual cases of cure felt to be significantly noteworthy to be reported.6,7 To evaluate the local spectrum of C. violaceum–related disease, we reviewed the patient characteristics and clinical course of infections in Far North Queensland (FNQ), Australia.

Cairns Hospital is a 531-bed tertiary referral hospital and the sole public microbiology provider for the FNQ region, an area covering 380,000 km2 with a population of approximately 280,000 people.8,9 Cases were included in the study if C. violaceum was isolated from a clinical specimen between January 1997 and October 2017 in the Cairns Hospital laboratory. The hospital medical record of each patient was reviewed, and their demographics, comorbidities, and clinical course were recorded. Isolates were classified as infection or colonization; colonization was defined as the isolation of the bacteria without evidence of infection, or when an alternative diagnosis was more likely. Severe disease was defined as the need for intensive care unit (ICU) support. Ethical approval was obtained from FNQ Human Research Ethics Committee (EC00157)-HREC/17/QCH/75–1122 QA.

Over the 20-year study period, C. violaceum was isolated on 28 occasions. Most isolates were from patients living in rural communities (Figure 1). Basic patient demographic information was available for all isolates. Two medical records had been destroyed; one of these isolates was from a lower limb wound, and the other was from the bronchial washings in a patient with metastatic adenocarcinoma. Among the 26 patients with available medical records, 15 (58%) isolates were classified as infections and 11 (42%) as colonization. The sites of colonization were sputum (4/11, 36%), skin and soft tissue (4/11, 36%), urine (2/11, 18%), and the throat (1/11, 9%). None of the cases classified as colonization received antimicrobial therapy for C. violaceum and none deteriorated clinically or required hospitalization.

The median (range) age of the 15 patients with infection was 33 (7–85) years; 10/15 (67%) were male. Bacteremia occurred in 4/15 (27%) cases; on two occasions, this complicated skin and soft tissue infection, and in two cases no focus was apparent. Infection most commonly involved the skin and soft tissue (four cases, 27%) and the urinary tract (four cases, 27%). The site of infection, and the patients’ treatment and clinical course are described in more detail in Table 1.

Chromobacterium violaceum infections in Far North Queensland, Australia, from 1997 to 2017

The antibiotic prescribed was not recorded, but the patient presented with clinical signs of sepsis and recovered after 7 days of hospitalization.

This patient did not receive targeted therapy against C. violaceum, but improved and survived without sequelae.

There were no deaths attributable to C. violaceum, although one patient, an 85-year-old man, died of aspiration pneumonia following a lengthy hospital admission for a below-knee amputation secondary to peripheral vascular disease. Chromobacterium violaceum had been isolated from urine 5 weeks previously and was felt to be unrelated to his death. None of the four patients with bacteremia required ICU support; all were managed on a general ward with intravenous antibiotics. Only one patient, a 28-year-old man with a history of alcohol excess, had disseminated disease with multiple liver abscesses (Figure 2). Chromobacterium violaceum was isolated from an axillary wound swab. He was cured with 3 weeks of intravenous meropenem followed by 4 weeks of oral ciprofloxacin; drainage of the liver abscesses was unnecessary.

Only two people (13%) with infections required admission to ICU, although neither admission was directly related to C. violaceum infection. One patient was admitted after suffering severe trauma in a motor vehicle accident and developed ventilator-associated C. violaceum pneumonia while in ICU. He responded well to ticarcillin–clavulanate. The second was a 26-year-old female who underwent a laparotomy for ischemic bowel while 15 weeks pregnant. She was taken to ICU postoperatively. Chromobacterium violaceum was isolated from her laparotomy wound 6 days after surgery. She was treated with ticarcillin–clavulanate and recovered well. There were no cases of relapsed infection in this series.

In the United States, C. violaceum infections are reported to have a case-fatality rate of 60%,2 but in FNQ, infections appear to have a far more benign clinical course. Our series comprises 28/218 (12.8%) of all reported clinical isolates from the literature, however, there was not a single death directly attributable to the infection.

Our findings are consistent with observations from other parts of Australia. In Darwin, Northern Australia, a series of 28 isolates of C. violaceum was described, 18 (64%) of which were felt to represent infection.10 There were 7 (39%) cases in this series that required ICU admission, although several of these infections were polymicrobial (with co-pathogens including Staphylococcus aureus and Escherichia coli) or developed after ICU admission for another reason (head trauma). There were two deaths in this series, although one of these cases represented polymicrobial Gram-negative sepsis with mixed coliforms in a patient with ischemic gut, and so, the independent contribution of C. violaceum is uncertain. Even allowing for the fact that other factors probably contributed to the deaths in this series, the case-fatality rate of 11% (2/18 patients in whom the C. violaceum was felt to represent a true infection) is significantly lower than that reported in the Northern Hemisphere literature.4,5

Of the 54 C. violaceum isolates in this and the Darwin series, 21 (39%) were felt to represent colonization.10 Although severe disease was reported more commonly in the Darwin series than in our series, the presence of coinfection in 72% of the Darwin cases suggests that other organisms may have at least partly contributed to the severe disease seen in that cohort. Indeed, in all 4 (27%) cases of polymicrobial infection in our series, the other isolates may have conceivably been primarily responsible for the clinical presentation (Table 1). These observations suggest a lower independent pathogenic potential of the organism in Northern Australia.

It is unclear why the case-fatality rate is much lower in these two Australian series. Host factors do not appear to be the explanation as there were 19/33 (58%) patients in the two series who had significant comorbidities and yet made an uneventful recovery. Better access to health care is also probably not an explanation as most of our cases were identified in remote locations, several hours from sophisticated hospital care. Indeed, the minority of the infections (6/15, 40%) received treatment in a tertiary referral hospital and 3/15 (20%) were managed as outpatients. The Darwin authors have hypothesized that the better outcomes in Australian patients may be linked to the use of meropenem in empirical regimens as cover for Burkholderia pseudomallei,10 but this was not the case in any of the patients in our series. National guidelines that have recommended the empirical use of ticarcillin–clavulanate in patients with open fractures and gentamicin in sepsis may have contributed to improved outcomes in some of our patients,11 but this represented a minority of the cases. Mortality from sepsis is declining in Australia with earlier recognition of the patient with sepsis and improvements in their care12,13; however, most of the patients were managed in remote locations with limited access to diagnostic services and the comprehensive critical care support recommended in the Surviving Sepsis Campaign.14 Indeed several of the patients were managed before the first iteration of the Surviving Sepsis Guidelines were promulgated.15

The high case-fatality rate seen in international series may be partly explained by a reporting bias of noteworthy cases, with patient recovery from an uncomplicated infection being less remarkable. However, the variable expression of virulence factors in different geographical locations is another possible explanation. Virulence factors identified in clinical isolates of C. violaceum include type III secretion systems, increased endotoxin production and resistance to phagocytosis—factors that may be less common in Australian strains.16,17 This hypothesis requires further study.

Disseminated disease, particularly with development of liver abscesses, has been associated with a mortality rate of 60–80%.6,7 There was only one patient in our series with this complication and he survived with intravenous antibiotics and supportive care on a general ward. Relapse or reinfection has been reported to occur in 7% of C. violaceum infections.4 This did not occur in any patient in our series, although this may be explained by the infrequent occurrence of deep-seated collections. Chromobacterium violaceum infection is more common in patients with chronic granulomatous disease (CGD),5 although there were no cases of CGD in our series.

Isolates were identified from both coastal regions and inland, mountainous regions, suggesting wide dispersal of the organism. There was a history of water or soil exposure in several of the cases. Interestingly, there were also three cases of nosocomial infections in the series—presumably due to selection pressure of broad-spectrum antibiotics—although this has been previously described.18–20

In conclusion, despite isolation on 28 occasions in the past 21 years, there has not been a single death attributable to C. violaceum in our region. Severe disease is extremely uncommon, and even in the patients with infection, antibiotic therapy and simple supportive care is usually all that is required for cure. Further investigation is required to establish whether the apparent marked disparity in clinical manifestations of C. violaceum infection in different parts of the world relates to reporting bias, the presence of specific virulence factors, or other factors that remain to be determined.