Violin plots depicting the overall Shannon’s entropy score for all nucleotide sites on the multiple sequence alignments (MSAs) for each gene/spacer. Entropy of zero means no variability at a specific position in the MSA, whereas a high entropy score indicates better discriminatory power among DNA sequences. The width of each plot represents the full distribution of entropy for each nucleotide site of the gene/spacer. The overall mean is represented by filled circles, whereas the median is shown as open circles. Genes gltA and rpoB, as well as intergenic transcribed spacer (ITS) region demonstrated higher entropy scores than 16S rRNA gene (P < 0.001, Bonferroni-adjusted Mann–Whitney–Wilcoxon Test). 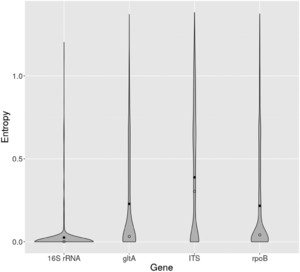 Bartonella rochalimae Detection by a Sensitive and Specific PCR Platform

Bartonella rochalimae is an emerging zoonotic pathogen present in the United States, South America, and Europe. The molecular detection of B. rochalimae frequently relies on polymerase chain reaction (PCR) assays that target the genus Bartonella coupled with DNA sequencing for species determination. However, the presence of other Bartonella spp. in the sample being tested may result in false-negative results for B. rochalimae, especially when Sanger sequencing is used. We developed a sensitive and specific quantitative PCR platform for B. rochalimae by targeting the intergenic transcribed spacer, gltA, and rpoB genes, which are recommended for subtyping characterization. This PCR platform achieved the limit of detection between five and 10 genomic equivalents per reaction and did not amplify DNA from other Bartonella species or selected hosts. This PCR platform is a fast and cost-effective option to be used in epidemiological evaluations of reservoirs and vectors and in detecting and quantifying B. rochalimae infection in humans.