Maps of Nakuru West subcounty in Kenya showing spatial distribution of anthrax cases during the disease outbreaks in 2014 (A), 2015 (B), and 2017 (C). The location of Lake Nakuru is shown in blue, whereas the surrounding Lake Nakuru National Park is illustrated by the green. Locations of human cases are marked by +, livestock cases by blue circles, and wildlife cases by red circles in each map. 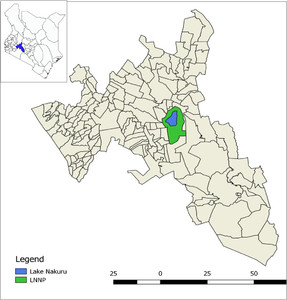 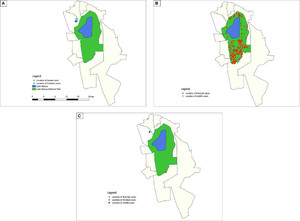 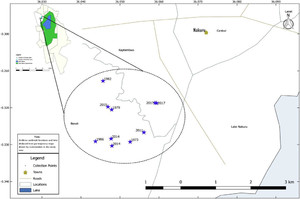 Recurrent Anthrax Outbreaks in Humans, Livestock, and Wildlife in the Same Locality, Kenya, 2014–2017

Epidemiologic data indicate a global distribution of anthrax outbreaks associated with certain ecosystems that promote survival and viability of Bacillus anthracis spores. Here, we characterized three anthrax outbreaks involving humans, livestock, and wildlife that occurred in the same locality in Kenya between 2014 and 2017. Clinical and epidemiologic data on the outbreaks were collected using active case finding and review of human, livestock, and wildlife health records. Information on temporal and spatial distribution of prior outbreaks in the area was collected using participatory epidemiology. The 2014–2017 outbreaks in Nakuru West subcounty affected 15 of 71 people who had contact with infected cattle (attack rate = 21.1%), including seven with gastrointestinal, six with cutaneous, and two with oropharyngeal forms of the disease. Two (13.3%) gastrointestinal human anthrax cases died. No human cases were associated with infected wildlife. Of the 54 cattle owned in 11 households affected, 20 died (attack rate = 37%). The 2015 outbreak resulted in death of 10.5% of the affected herbivorous wildlife at Lake Nakuru National Park, including 745 of 4,500 African buffaloes (species-specific mortality rate = 17%) and three of 18 endangered white rhinos (species-specific mortality rate = 16%). The species mortality rate ranged from 1% to 5% for the other affected wildlife species. Participatory epidemiology identified prior outbreaks between 1973 and 2011 in the same area. The frequency and severity of outbreaks in this area suggests that it is an anthrax hotspot ideal for investigating risk factors associated with long-term survival of anthrax spores and outbreak occurrence.