(A) Tinea corporis presented as a disseminated, circinate, and scaly rash with an active, erythematous, well-defined border. (B) The patient presented with exuberant tinea barbae lesions, in addition to nail dystrophy due to onychomycosis and an ulnar neuropathy, leading to a partial claw hand deformity of leprosy. (C) The patient’s earlobe exhibited an infiltration typically seen in lepromatous leprosy patients; the earlobe also developed skin peeling related to the fungal infection. (D) The white colonies of Trichophyton mentagrophytes and Trichophyton tonsurans showing variations in texture: granular to powdery, flat, and often with radial grooves. The growth of both dermatophytes on potato dextrose agar media for 30 days at 25°C. (E) Final fungal identification was based on chlamydospore-like structure identification by light microscopy from the cultured petri dishes. Microscopic morphology of T. tonsurans is described with numerous variably shaped microconidia formed along the septate hyphae; this feature is known as the birds on a wire pattern. Lactophenol blue stain was used, ×250 magnification. 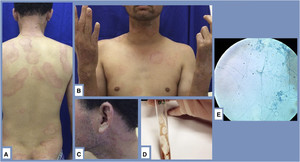