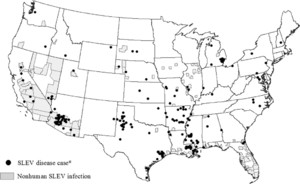 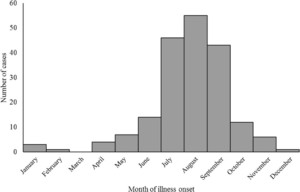 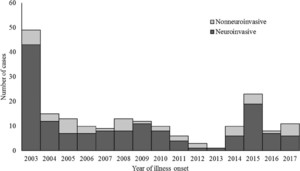 St. Louis encephalitis virus (SLEV), an arthropod-borne flavivirus, can cause disease presentations ranging from mild febrile illness through severe encephalitis. We reviewed U.S. national SLEV surveillance data for 2003 through 2017, including human disease cases and nonhuman infections. Over the 15-year period, 198 counties from 33 states and the District of Columbia reported SLEV activity; 94 (47%) of those counties reported SLEV activity only in nonhuman species. A total of 193 human cases of SLEV disease were reported, including 148 cases of neuroinvasive disease. A median of 10 cases were reported per year. The national average annual incidence of reported neuroinvasive disease cases was 0.03 per million. States with the highest average annual incidence of reported neuroinvasive disease cases were Arkansas, Arizona, and Mississippi. No large outbreaks occurred during the reporting period. The most commonly reported clinical syndromes were encephalitis (N = 116, 60%), febrile illness (N = 35, 18%), and meningitis (N = 25, 13%). Median age of cases was 57 years (range 2–89 years). The case fatality rate was 6% (11/193) and all deaths were among patients aged > 45 years with neuroinvasive disease. Nonhuman surveillance data indicated wider SLEV activity in California, Nevada, and Florida than the human data alone suggested. Prevention depends on community efforts to reduce mosquito populations and personal protective measures to decrease exposure to mosquitoes.

St. Louis encephalitis virus (SLEV), an arthropod-borne virus (arbovirus), was first recognized as a cause of viral encephalitis in 1933 during an outbreak involving more than 1,000 cases in St. Louis, MO.1,2 Although the geographic range of the virus extends from Canada to Argentina, almost all human cases have been reported in the United States.3 St. Louis encephalitis virus is maintained in nature in a mosquito–bird–mosquito transmission cycle, with humans considered dead-end hosts.2 In the decades following its recognition, two different transmission patterns became apparent. In the western United States, where Culex tarsalis was the primary vector, SLEV transmission was endemic, causing sporadic cases. By contrast, the virus exhibited greater epidemic potential in the eastern United States where it was transmitted primarily via Culex pipiens, Culex quinquefasciatus, and Culex nigripalpus.2,4

St. Louis encephalitis virus is a member of the Flavirivus genus, which includes West Nile, Japanese encephalitis, and dengue viruses. The incubation period for SLEV infection is approximately 5–15 days. Although most SLEV infections are asymptomatic, disease presentations can range from mild febrile illness through severe encephalitis. There are no vaccines to prevent or medications to treat SLEV infections.

We reviewed confirmed and probable cases of human SLEV disease and nonhuman infections reported to ArboNET from 2003 through 2017. We analyzed human data on state and county of residence, age, gender, race, ethnicity, clinical syndrome, date of illness onset, hospitalization, and mortality. Nonhuman data were analyzed on species type, and state and county of collection. We analyzed the data using Excel version 2016 (Microsoft Corp, Redmond, WA) and SAS statistical software version 9.4 (SAS Institute, Cary, NC). Maps were made using ArcGIS version 10.5.1 (Esri, Redlands, CA). Categorical variables were described as counts and proportions, and continuous variables were described by median and range. Incidence rates were calculated using neuroinvasive disease case counts, which are considered the most accurate indicator of SLEV activity in humans due to the associated morbidity, and annual population estimates from the U.S. Census Bureau.8

Of the five cases with acute flaccid paralysis, three also had encephalitis and one had meningitis.

During the 15-year period from 2003 to 2017, 193 cases of SLEV disease, including 148 cases of neuroinvasive SLEV disease, were reported to ArboNET, predominantly from southern states. Most cases and all deaths were among patients aged ≥ 40 years. Annual case numbers were generally low and no large outbreaks occurred.

The epidemiology of SLEV disease in the United States has changed since it was first recognized as a cause of viral encephalitis in 1933. Previously, SLEV disease was the leading cause of arboviral disease in the United States and caused periodic large outbreaks in the southeastern and central United States at intervals up to approximately 10 years.2,9 Outbreaks often resulted in hundreds of reported cases, with the largest outbreak in 1975 resulting in about 2,000 reported cases.10 The last major outbreak occurred in Florida in 1990 with > 200 cases reported.11 In the following years, only smaller outbreaks were reported.5,12,13 During the period of our review, the only notable SLEV activity was a small outbreak in Texas in 2003 and a localized outbreak in Maricopa County, Arizona, in 2015. Overall, case numbers were low with a median of only 10 reported cases per year. West Nile virus (WNV) and La Crosse virus are now the leading causes of arboviral encephalitis in the United States.14

The reasons for the changing SLEV epidemiology are unclear. Some researchers have suggested that SLEV was competitively displaced in parts of the United States by the introduction of WNV.3 St. Louis encephalitis virus and WNV share the same Culex species mosquito vectors and avian hosts. Studies suggest WNV-infected birds develop sterilizing immunity to both WNV and SLEV, but birds previously infected with SLEV can still develop viremia if infected with WNV.3 Thus, the spread and continued circulation of WNV might have resulted in fewer avian hosts susceptible to SLEV, reducing SLEV transmission to humans.

Another contributing factor to the low reported case numbers might be laboratory testing practices. St. Louis encephalitis virus testing is available at CDC and some state health department and commercial laboratories. However, because both incidence and awareness of WNV disease are substantially higher than SLEV disease, SLEV testing might not routinely be requested. In addition, cross-reactivity between WNV and SLEV antibodies can occur with standard diagnostic tests, requiring confirmatory neutralizing antibody testing to determine the infecting flavivirus. If only WNV testing is conducted, or if confirmatory testing is not conducted on an initially seropositive WNV sample, SLEV disease cases might remain undetected or be misdiagnosed as WNV disease cases.

Additional ecologic or other unknown factors also could be contributing to the changing epidemiological pattern of SLEV disease. With an increasingly long period since the last large SLEV outbreak in 1990, it seems unlikely that an outbreak of the magnitude seen in the past will occur again. However, the extent, timing, and nature of any reemergence cannot confidently be determined. In 2015, for example, in addition to the small outbreak in Arizona, SLEV activity unexpectedly was detected through mosquito and sentinel chicken surveillance in southern California after an apparent 11-year absence.15 Sequencing showed > 99% nucleotide homology between the 2015 California and Arizona isolates, and with a 2005 Argentinian isolate, suggesting a possible introduction of SLEV to the United States from South America at an unknown time.15

The 2015 outbreak of SLEV disease in Arizona, as well as being the only SLEV disease outbreak reported during the past decade, was also the first known concurrent outbreak of SLEV and WNV disease in the United States.16 The simultaneous circulation of SLEV and WNV led to the challenge of correctly diagnosing infections, as both viruses have similar clinical presentations and cross-react serologically. Although medical treatment of the two infections does not differ, correctly identifying SLEV disease cases is critical to SLEV surveillance, monitoring epidemiologic trends, and for determining causality of individual patients’ infections. During this outbreak, probable SLEV transmission via blood transfusion also was recognized for the first time.17 Although this was not unexpected given previous occurrences of WNV transmission via blood transfusion, it was the first time SLEV transmission by transfusion had been documented.18,19

Similar to previously published surveillance data and research studies, our review showed the greatest burden of disease was in older age groups.2,3 Studies have demonstrated that infection rates are similar among all age groups but that progression to symptomatic disease is more common in older people.2,3 The risk of severe and fatal disease also has been shown previously to be higher in older age groups.2,12

The nonhuman surveillance data reported to ArboNET were primarily from mosquito and sentinel chicken infections. Experimental infection studies indicated few birds produce elevated viremia and succumb to infection, so dead birds with possible SLEV infection are likely infrequently tested.20 The nonhuman surveillance data indicated wider SLEV activity than the human data alone suggested, particularly in California, Nevada, and Florida. One explanation for the low incidence of human disease cases in these states could be related to diagnostic testing and surveillance biases. If providers are not aware of virus circulation in their area, they may not consider SLEV infection in their differential diagnosis. In addition, population immunity might be a factor in long-term residents of endemic areas, such as parts of California.21–24 Different exposure risks for human and animal populations or factors relating to locations of mosquito and animal testing are other possible explanations.

The findings in this review are subject to several limitations. First, ArboNET is a passive surveillance system that is dependent on clinicians considering the diagnosis of SLEV disease, obtaining the appropriate diagnostic test, and reporting positive results to public health authorities. Therefore, diagnosis and reporting are likely incomplete, and the incidence of SLEV disease is likely underestimated, particularly for cases of nonneuroinvasive disease. Second, because ArboNET does not require information regarding clinical signs and symptoms or laboratory findings (e.g., cerebrospinal fluid findings), misclassification of the various neurologic syndromes caused by SLEV (i.e., encephalitis, meningitis, and other neurologic presentations) cannot be detected. Finally, nonhuman surveillance data are reported voluntarily and are subject to greater variability in detection and reporting between jurisdictions.

St. Louis encephalitis virus outbreaks appear to have decreased in both intensity and frequency, and disease incidence during the past 15 years has been relatively low. However, SLEV disease can be a severe disease, especially among older people, and prevention measures remain important.

Health-care providers should consider SLEV infections in the differential diagnosis of cases of aseptic meningitis and encephalitis, obtain appropriate specimens for laboratory testing, and promptly report cases to public health authorities. Prevention depends on community and household efforts to reduce vector populations (e.g., applying insecticides and reducing breeding sites) and personal protective measures to decrease exposure to mosquitoes (e.g., use of repellants and wearing protective clothing). Based on the epidemiology described here and in previous reports, efforts to prevent SLEV disease should primarily target older adults in southern states.