The location of the study, the three endemic sites in the Yemeni onchocerciasis area (the known endemic area indicated by the area ringed along the mountainous Red Sea border of the country). (A) Wadi Al Zabid, (B) Wadi Al Ana, and (C) Wadi al Ghail.

The differences in Onchocerca volvulus positivity between males and females resident in the three different endemic zones of onchocerciasis in Yemen. 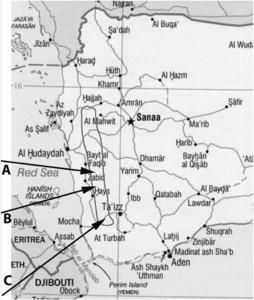 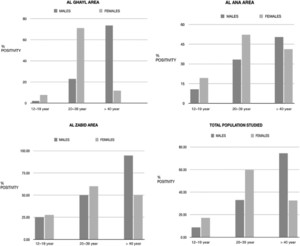 A Serological Survey of Human Onchocerciasis in Yemen

Yemen is a country that has been treating severe cases of oncho-dermatitis since 1992 and is now moving to a program aimed at the elimination of the transmission of Onchocerca volvulus. It is important to ensure that the currently acceptable tools used in epidemiological assessment of onchocerciasis in Africa and Latin America also apply to Yemen. Five hundred and ten blood samples from three known O. volvulus–endemic areas, locations that have never been under a mass treatment program, were tested for the presence of antibodies against a panel of O. volvulus–specific antigens using enzyme-linked immunosorbent assay (Ov16) and luciferase immunoprecipitation system (Ov-FAR-1 and Ov-MSA-1) assays. Overall, 31.4% of the samples tested were positive, with positivity increasing with age. Positivity was seen in 76.5% of those presenting with clinical onchocerciasis but importantly also in more than 28.5% of those defined as free of oncho-dermatitis; these latter individuals are likely to be serving as a source for persistent reinfection. This study supports the use of the current O. volvulus–specific serologic methodology in Yemen.