Microscopic hematuria evolution before and after praziquantel.

Median ultrasound before and after praziquantel according to WHO score. 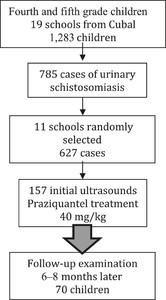 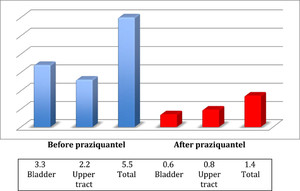 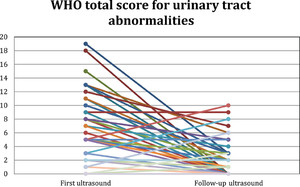 Urinary schistosomiasis causes damage to the urological system. Ultrasound is a method that detects the burden of secondary disease, individually and in epidemiological studies. In this study, the Schistosoma haematobium–associated urinary tract pathology is analyzed before and after treatment in a short period of time. Seventy children who had previously participated in an epidemiological study on schistosomiasis in the city of Cubal, Angola, and had also performed urinary ultrasound between August 2013 and February 2014 were cited 6–8 months later to assess the possible reinfection and repeat new urinary ultrasound, analyzing changes at the level of urinary pathology. The presence of hematuria and proteinuria was also analyzed. Of the 70 children analyzed, 29 (41.4%) were girls, with an average age of 10.4 years (standard deviation 2.3). Fifty-three (75.7%) had an improvement in their bladder and/or kidney scores, whereas 12 (17.1%) had no change and five (7.1%) had progression of the disease. None of the parameters analyzed completely disappeared. After one single course of treatment with praziquantel, all the analyzed parameters showed regression. Improvement was greater in the urinary bladder than in the upper urinary tract, though these lesions also reversed; the reversion of all parameters was greater among children older than 10 years old than the younger ones. Proteinuria was the parameter with a smaller reduction. Ultrasound should be a usual tool for diagnosis and follow-up in urinary schistosomiasis, particularly in children; more accurate recommendations about follow-up in the case of children whose lesions do not reverse should be established.