Sigmoid regression curves with parameters “a,” “b,” and “x0” used in calculating the effective concentrations of deltamethrin associated with 50% (EC50) and 80% (EC80) mortality determined from the World Health Organization cone test.

Contour plot of deltamethrin surface levels showing insecticide density typically found in nets after 24 months of normal use. Values with the associated colors are proportions relative to levels found in the roof (roof = Red = 1). The green portion represents the average level for the entire net. 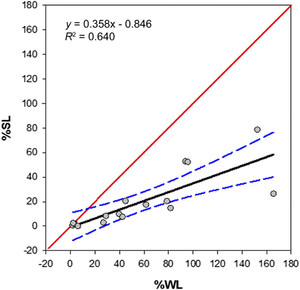 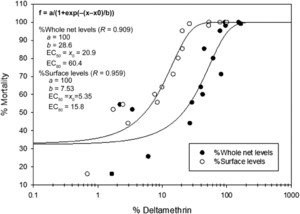 An important component of malaria control programs is the ability to assess the effectiveness of the insecticide in insecticide-treated nets (ITNs) during normal usage. The standard technique to measure insecticidal activity is the World Health Organization (WHO) cone test, which in many circumstances, may be difficult to implement. We have evaluated an alternative technique, the colorimetric field test (CFT) on a group of 24-month-old Permanet® 2.0 (Vestergaard-Frandsen, Denmark) nets collected in Colombia. The CFT, which measures surface levels (SL) of deltamethrin is compared with standard high-performance liquid chromatography (HPLC) and the WHO cone test. Effective concentrations of deltamethrin for 80% mortality (EC80) were determined from the CFT and HPLC results. Distribution of insecticide SL after 24 months of use reveal that sampling of the midsection best represents the condition of the entire net. We conclude that the CFT is a practical alternative to the WHO cone test for assessing ITN efficacy.