Photos of the conical cup blood transfer device, showing a general view (A), the blood collection step (B), and the deposit of blood on a rapid diagnostic test (C). This figure appears in color at www.ajtmh.org.

Health worker (HW) self-assessment responses comparing the conical cup and the pipette blood transfer devices (BTDs) immediately after use. Questions to 48 HWs conducting a maximum of 10 blood transfers each on human African trypanosomiasis rapid diagnostic tests (RDTs) with the conical cup and the pipette BTDs for the diagnosis of patients were as follows. 1) Did you have to make more than one attempt to collect the desired amount of blood? 2) Was the conical cup fully filled with blood, or the pipette filled to the marked line? 3) Was blood released unintentionally from the device at any time before reaching the RDT? 4) Did you have to make more than one attempt to deposit all the blood in the RDT well? 5) Did blood touch your gloves, skin, clothing, or any other surface at any time? 6) Was there any blood remaining in the transfer device after deposit in the RDT well? CC = conical cup BTD; P = pipette BTD. *Signifies comparison between the pipette and the conical cup BTDs being filled adequately with blood; OR = 3.42 (1.89–6.21), P < 0.001 (McNemar’s test).

Ease of use and safety of the pipette and the conical cup blood transfer devices (BTDs) in the hands of health workers (HWs), assessed by observers at study end. Questions to study staff observing HWs conducting a maximum of five blood transfers on human African trypanosomiasis rapid diagnostic tests with the conical cup and the pipette BTDs during a workshop at the study end were as follows. 1) Did the HW make more than one attempt to collect blood? 2) Was the cup fully filled with blood/the pipette filled up to the mark? 3) Was blood released unintentionally? 4) Did the HW make more than one attempt to deposit blood? 5) Did blood touch HW’s gloves, skin, clothing, or surfaces? 6) Did blood remain in the conical cup/in the pipette BTD after deposit? CC = conical cup BTD; P = pipette BTD. *Signifies comparison between the pipette and the conical cup BTDs being filled adequately with blood; OR = 3.42 (1.89–6.21), P < 0.001 (McNemar’s test). 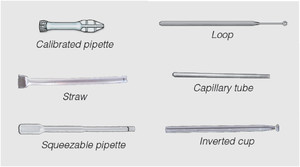 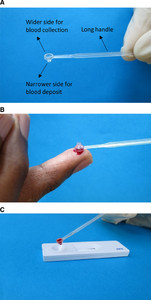 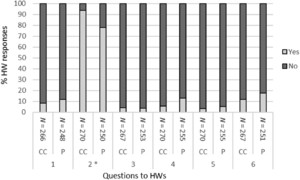 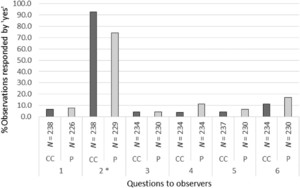 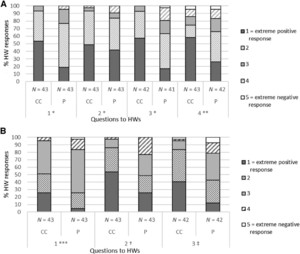 Accuracy, Ease of Use, Safety, and Acceptability of a 23-μL Conical Cup Blood Transfer Device for Use with Rapid Diagnostic Tests

Devices to safely transfer fixed amounts of finger prick blood to rapid diagnostic tests (RDTs) pose a significant challenge, especially in non-laboratory settings. Following the success of an “inverted cup device” for transfer of 5 μL blood, a prototype with a conical cup shape was developed for transfer of 20 μL blood, the amount needed for human immunodeficiency virus or human African trypanosomiasis (HAT) RDTs. This study determined the volume of blood transferred by this new blood transfer device (BTD) and compared its ease of use, safety, and acceptability with that of a plastic pipette when used by health workers (HWs) for HAT RDTs in northwestern Uganda. After a half-day training, 48 HWs had used the two BTDs with at least 10 patients. The conical cup BTD effectively transferred a mean of 22.76 μL of blood (standard deviation 3.31 μL). A significantly higher proportion of HWs were able to collect the full amount of blood using the conical cup BTD, as compared with the pipette (92.4% versus 74.2%, P < 0.001). In HW questionnaires, the conical cup BTD scored higher than the pipette in various aspects of ease of use and safety. In addition, HWs preferred the conical cup BTD (79%), indicating that it was easy to handle, made work faster, and increased their confidence in front of the patient. These findings suggest that the design of the conical cup BTD may be adapted for RDTs requiring 20 μL of blood to facilitate safe and accurate blood transfer.