Clusters selected and location of hepatitis B surface antigen–positive (HBsAg+) children, hepatitis B seroprevalence study—Bangladesh, 2011–2012. This figure appears in color at www.ajtmh.org. 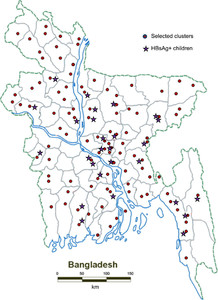 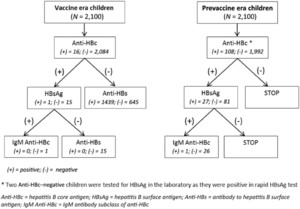 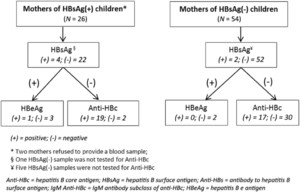 Bangladesh introduced hepatitis B vaccine in a phased manner during 2003–2005 into the routine childhood vaccination schedule. This study was designed to evaluate the impact of the introduction of hepatitis B vaccine in Bangladesh by comparing hepatitis B surface antigen (HBsAg) prevalence among children born before and after vaccine introduction and to estimate the risk of vertical transmission of chronic hepatitis B virus (HBV) infection from mother to infant. We also evaluated the field sensitivity and specificity of an HBsAg point-of-care test strip. We selected a nationally representative sample of 2,100 prevaccine era and 2,100 vaccine era children. We collected a 5-mL blood sample from each child. One drop of blood was used to perform rapid HBsAg testing. If a child had a positive HBsAg test result with the rapid test, a blood sample was collected from the mother of the HBsAg-positive child and from the mothers of two subsequently enrolled HBsAg-negative children. All samples were tested for serologic markers of HBV infection using standard enzyme-linked immunosorbent assay. One (0.05%) child in the vaccine era group and 27 (1.2%; 95% confidence interval [CI]: 0.8–1.7%) children in the prevaccine era group were HBsAg positive. Mothers of HBsAg-positive children were more likely to be HBsAg positive than mothers of HBsAg-negative children (odds ratios = 4.7; 95% CI: 1.0–21.7%). Sensitivity of the HBsAg rapid test was 91.2% (95% CI: 76.6–98.1%) and specificity was 100% (95% CI: 99.9–100%). The study results suggest that even without a birth dose, the hepatitis B vaccine program in Bangladesh was highly effective in preventing chronic HBV infection among children.