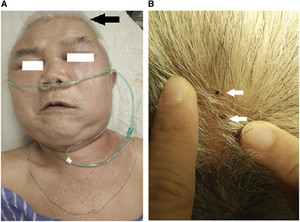 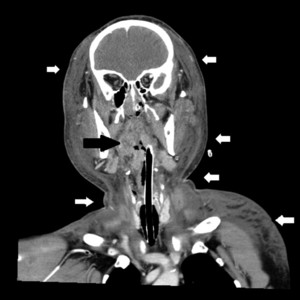 Protobothrops mucrosquamatus (Trimeresurus mucrosquamatus) is a medically important species of pit viper with a wide geographic distribution in Southeast Asia. Bites by P. mucrosquamatus mostly involve the extremities. Little is known about the toxic effects of P. mucrosquamatus envenoming to the head because of the infrequency of such occurrence. To better delineate the clinical manifestations of envenoming to the head, we report three patients who suffered from P. mucrosquamatus bites to the head and were treated successfully. All three patients developed progressive soft tissue swelling extending from head to neck, with two patients expanding further onto the anterior chest wall. Mild thrombocytopenia was noted in two patients. One patient had transient acute renal impairment and airway obstruction, necessitating emergent intubation. All three patients received high doses of species-specific antivenom with recovery within 1 week. No adverse reactions to antivenom were observed.