Map of study sites in Loreto-Peru. This figure appears in color at www.ajtmh.org. 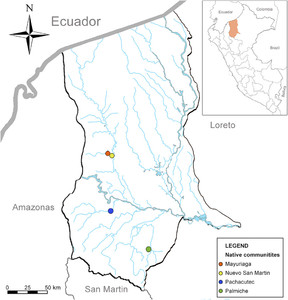 In the Americas, 8 million people are infected with Chagas disease, and an additional 90 million people are at risk for infection. Little is known about the role bats play in the sylvatic transmission cycle of Trypanosoma cruzi, the parasite causing Chagas disease. Here, we captured bats in the villages of Palmiche, Pachacutec, Nuevo San Martin, and Mayuriaga located in the Datem del Marañon Province in Loreto, Peru. Venous blood samples were collected by cardiac puncture or from the upper extremities, and trypanosomatids were identified by microscopy and molecularly. We collected blood samples from 121 bats on filter paper for molecular studies and 111 slides for microscopic examination of thin and thick blood smears from 16 different bat species. The prevalence of trypanosomatids in all bats species was 34.7% (42/121) and the prevalence of T. cruzi was 4.1% (5/121). In hematophagous bat species, the prevalence of trypanosomatids and T. cruzi was 36.9% (27/73) and 2.7% (2/73), respectively. In non-hematophagous bats, the prevalences of trypanosomatids and T. cruzi were 31.2% (15/48) and 6.2% (3/48), respectively. Also, we confirm the presence of T. cruzi in salivary glands of hematophagous bats Diaemus youngi. These results suggest a sylvatic cycle of trypanosomatid transmission in which bats may harbor infectious T. cruzi parasites that could be transmitted to humans via hematophagous bat bites or salivary contamination by non-hematophagous bats of vegetables consumed by humans.