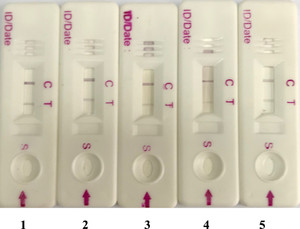 The present study aims to develop a method for rapid diagnosis of malaria using loop-mediated isothermal amplification (LAMP) combined with a lateral flow device (LFD). By adding the biotin-labeled and fluorescein amidite-labeled loop primers to the LAMP reaction solution, the end product can be visualized on a LFD. The entire procedure takes approximately 42 minutes to complete, LAMP assay exhibited high sensitivity, as the detection limit was 0.01 pg/μL for all five Plasmodium species. It was demonstrated that all Plasmodium knowlesi (N = 90) and Plasmodium vivax (N = 56) were positively amplified by LAMP-LFD assay, whereas healthy donor samples (N = 8) were negative. However, not all mixed infections were positive, and other infected nonmalaria samples were negative. Loop-mediated isothermal amplification-LFD represents a robust approach with potential suitability for use in resource-constrained laboratories. We believe that LAMP-LFD has a potential to be developed as point-of-care diagnostic tool in future.