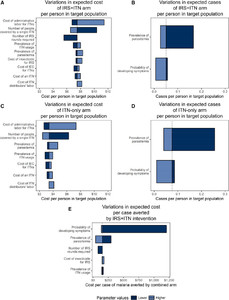 Using a decision-tree approach, we examined the cost-effectiveness of indoor residual spraying (IRS) of households with insecticide combined with insecticide-treated bed net (ITN) distribution (IRS + ITN), compared with ITN distribution alone in the programmatic context of mainland Tanzania. The primary outcome of our model was the expected economic cost to society per case of malaria averted in children ≤ 5 years of age. Indoor residual spraying of households with insecticide data came from a program implemented in northwest Tanzania from 2008 to 2012; all other data originated from the published literature. Through sensitivity and scenario analyses, the model also examined the effects of variations in insecticide resistance, malaria prevalence, and different IRS modalities. In the base case, IRS + ITN is expected to be more expensive and more effective than the ITN-only intervention (incremental cost-effectiveness ratio [ICER]: $152.36). The number of IRS rounds, IRS insecticide costs, ITN use, malaria prevalence, and the probability that a child develops symptoms following infection drove the interventions’ cost-effectiveness. Compared with universal spraying, targeted spraying is expected to lead to a higher number of malaria cases per person targeted (0.211–0.256 versus 0.050–0.076), but the incremental cost per case of malaria averted is expected to be lower (ICER: $41.70). In a scenario of increasing pyrethroid resistance, the incremental expected cost per case of malaria averted is expected to increase compared with the base case (ICER: $192.12). Tanzania should pursue universal IRS only in those regions that report high malaria prevalence. If the cost per case of malaria averted of universal IRS exceeds the willingness to pay, targeted spraying could provide an alternative, but may result in higher malaria prevalence.