Timeline of the clinical onset of malaria in the group of Thai workers in Nigeria. This figure appears in color at www.ajtmh.org. 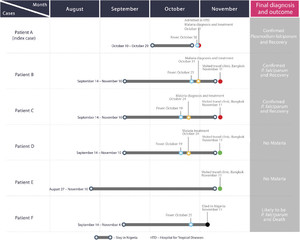 Although falciparum malaria is an important risk among travelers to sub-Saharan Africa, many travelers remain unaware of this risk. In October 2015, we found a cluster of imported Plasmodium falciparum malaria cases among Thai gem mine workers in Nigeria; none had received malaria chemoprophylaxis or information regarding malaria risk. The index case developed fever and visited our hospital on arrival day in Thailand after his 3-week stay in Nigeria. Plasmodium falciparum was found in his blood. He recovered completely 3 days post-admission. After we requested he contact his colleagues in Nigeria regarding malaria risk, we found that three of his five colleagues currently had fever, were diagnosed with malaria, and were being treated in a local hospital. Two were successfully treated in Nigeria. Although their blood films were negative for malaria, we could confirm that they recently had malaria because the polymerase chain reaction (PCR) was still positive for P. falciparum. Tragically, the last febrile case died in Nigeria 6 days post-admission, after developing jaundice and alteration of consciousness. The two colleagues without fever symptoms were also tested by PCR, which was negative for malaria. In conclusion, we found that four of six workers had malaria in this cluster, which was equal to 66.7% attack rate. There is an urgent need to raise awareness of malaria among workers in highly endemic areas. Clinical practice for travelers who are ill on their return should not only focus on individual cases but also consider potential disease clusters.