Hypoderma lineatum larva and cutaneous lesion: (A) H. lineatum second stage larva (18 mm long and 6 mm wide) removed by the physician; (B) Posterior extremity of the larva where the spiracles are clearly visible, with 36–37 openings; (C) Slightly raised linear lesion in the interscapular region of the patient. This figure appears in color at www.ajtmh.org. 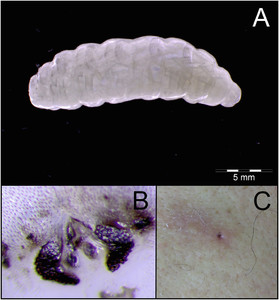 We report a case of human cutaneous myiasis by Hypoderma lineatum, contracted by a farmer who never traveled outside Italy. Identification at species level has been performed by both morphological examination and sequencing of cytochrome c oxidase subunit I gene. This is the first description of human hypodermosis by H. lineatum contracted in Europe.

In June 2014, a 63-year-old Italian man came to an allergy specialist. The patient lives in a small village in Sardinia, Italy. He is a farmer who lives in close contact with cattle and never traveled outside Sardinia. He reported pruritus and edema on the right leg and a papular dermatitis in the right inguinal region. Symptoms decreased in few days and no therapy was administered.

In January 2015, the patient returned to visit complaining of the reappearance of generalized pruritus and pain, this time in the neck area. The patient had no fever, showed eosinophilia, (8.4%) and increased total immunoglobulin E (204 IU/mL). Other results of complete blood count were within normal limits. He had no other significant medical history and was not taking any drugs; however, his profession (farmer) and the daily contact with cattle and other animals could be accounted as risk factors for zoonosis. He reported that in December 2014 he had suffered from generalized pruritus and pain in the cervical region, followed few days later by the emergence of a furuncle in the left clavicular area. The patient reported having squeezed the furuncle until a whitish moving “worm” of approximately one cm in length was removed and discarded. Symptoms ceased soon after. Physical examination of the patient showed the presence of a second furuncle in the interscapular region with a slightly raised linear lesion, and a living white larva was removed by the physician (Figure 1A and C). At 40-day follow-up the patient reported no more pruritus or edema.

According to morphological features,1 the parasite (18 mm long and 6 mm wide) was identified as a second stage larvae of Hypoderma spp: the anterior extremity was rounded, with rudimentary mouth hooks, while at the posterior extremity were clearly visible the spiracles, with 36–37 openings (Figure 1B).

To identify the larva at species level, DNA was extracted from the mid-body of the parasite, and partial mithocondrial cytochrome c oxidase subunit I gene (Cox1) was amplified by PCR as described by Otranto et al.2 A polymerase chain reaction amplicon of the expected length (∼688 bp) was obtained from the parasite DNA and not from negative controls. Amplified DNA was sequenced and aligned with those available in GenBank using the basic local alignment search tool (BLAST) analysis (National Center for Biotechnology Information; ncbi.nlm.nih.gov) and with the software MEGA 6.3 The BLASTn of Cox1 sequence herein obtained (GenBank KP965726) displayed a nucleotide homology of 100% with Hypoderma lineatum (GenBank AF497762.1), 94% with Hypoderma sinense (GenBank AY350769.1), and of 92% with Hypoderma bovis (GenBank AF497761.1). Morphological and molecular analyses, taken together, allowed us to identify the parasite as a second-stage larva of H. lineatum. A blood sample of the patient was tested by enzyme-linked immunosorbent assay, using plates coated with purified antigens of L1 larvae of H. lineatum, revealing the presence of specific anti-Hypoderma immunoglobulin G antibodies.

Hypodermal myiasis is an infestation of the subcutaneous tissue of cattle, caused by larvae of flies of the genus Hypoderma. Three species, H. bovis, H. lineatum, and H. sinense, are known to cause bovine hypodermosis.4 This infestation is widely distributed in the Northern Hemisphere and affects the productivity and welfare of animals, causing significant economic losses. In some areas of Italy, such as Sardinia, cattle infestation accounts for an estimated 85% of economic loss.5

In cattle, H. lineatum has an annual synchronized biological cycle. Adult flies live 1 week between May and July, during which they lay eggs on their hosts. Within the host, larvae migrate in the deep connective tissues until the following spring, when they reach the host dorsal subcutaneous tissue and moult into the second and the third larval stages, producing swellings on the skin.6 Considering the biology of the parasite, we can assume that the patient had been infested in May–June 2014. In fact, symptoms described in June are consistent with the migration of first stage larvae, and the emergence of the second stage larvae 5–6 months later corresponds to the period required for parasite development.

Human hypodermosis is extremely rare and may accidentally occur in people living in close contact with cattle, especially in tropical regions. Infestation is associated with creeping cutaneous myiasis, ophtalmomyiasis, and meningitis, often accompanied by skin allergies and eosinophilia.7 Less than 20 cases of human cutaneous hypodermosis have been reported so far worldwide, of which the vast majority were caused by H. bovis. Differential diagnosis with this last species should be taken into account and performed also with molecular tools, as the parasite stage in an unusual host could not show all its typical morphological features.2 Almost 10 cases of cutaneous myasis by H. lineatum have been described so far worldwide, and all were acquired traveling in tropical areas.8–10 No cases of human cutaneous myiasis by any Hypoderma species have been described so far in Italy.11

To our knowledge, this is the first report of human cutaneous hypodermosis contracted in a nontropical area. Physicians should consider hypodermal myiasis not only in patients with cutaneous lesions returning from tropical countries, but also in those who live in temperate areas endemic for cattle hypodermosis.