Map of all hemodialysis centers in Far North Queensland and relative distance from Cairns, the region’s largest city. This figure appears in color at www.ajtmh.org. 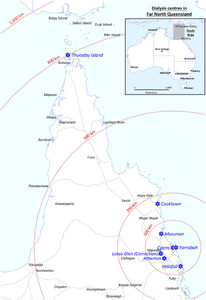 Antibiotic Prophylaxis for Melioidosis in Patients Receiving Hemodialysis in the Tropics? One Size Does Not Fit All

Melioidosis has a high case fatality rate and is more common in patients with chronic kidney disease. Some authors recommended trimethoprim/sulfamethoxazole (TMP/SMX) prophylaxis for all hemodialysis (HD) patients during the wet season in melioidosis-endemic regions. Historical data were reviewed to determine if TMP/SMX prophylaxis was warranted in the HD population of Far North Queensland, Australia. Between 1997 and 2017, there were 242 culture-confirmed cases of melioidosis in the region, three (1.2%) occurred in HD patients; all survived without intensive care support. During the study period, there were 843 HD patients in the region with 3,024 cumulative patient years of risk. Even assuming 100% efficacy, it would have been necessary to prescribe TMP/SMX for 1,008 patient years to prevent one case of melioidosis. Given the significant additional cost and potentially life-threatening side effects of TMP/SMX therapy, clinicians should review the local epidemiology of melioidosis before the implementation of universal TMP/SMX prophylaxis in their HD population.

Melioidosis, caused by the bacterium Burkholderia pseudomallei, is a seasonal, opportunistic infection endemic to the tropics with a global distribution.1,2 Although the infection is usually asymptomatic, it may be rapidly fatal in individuals with specific comorbidities, including diabetes mellitus, hazardous alcohol use, and chronic kidney disease.1 The increased frequency of melioidosis among patients receiving long-term hemodialysis (HD) in the Northern Territory of Australia,3 led local clinicians to prescribe prophylactic trimethoprim/sulfamethoxazole (TMP/SMX) to this population during the region’s wet season.4 In an observational trial, performed in a single, 6-month wet season, there were no cases of melioidosis in the 169 adult HD patients who received daily prophylactic TMP/SMX compared with 16 (17%) cases in the 92 adult HD patients who did not. These impressive results led the authors to recommend prophylactic TMP/SMX in tropical Northern Australia and other regions where melioidosis is prevalent.4

However, the patients in this study receiving TMP/SMX had higher rates of thrombocytopenia and neutropenia, three (1.8%) patients suffered significant side effects, one of whom died. Therefore, before implementation of this approach in Far North Queensland (FNQ), a region in tropical Australia with a similar melioidosis burden,5 we reviewed the pattern of disease in our HD population, to determine if a policy of TMP/SMX prophylaxis was warranted, safe, and cost-effective.

Cairns Hospital is a 531-bed, tertiary referral hospital located in FNQ, a region of 380,000 km2 in the northeast of Australia (Figure 1). The Cairns Hospital laboratory is the region’s sole provider for public microbiology services. The hospital also provides HD services at nine HD sites (Figure 1) and supports home HD across the region. All patients receiving renal replacement therapy (RRT) have their data recorded in the Cairns Hospital dialysis database that provides data to Australia and New Zealand dialysis and transplant registry. All cases of culture-confirmed B. pseudomallei infection between January 1, 1997 and December 31, 2017 were identified in the microbiology laboratory’s electronic database. These data were compared with the RRT database to determine the number of patients who developed melioidosis while receiving HD, their characteristics, and the clinical course of their infection. The wet season in FNQ runs from December to April; therefore, the number of patients receiving HD on December 31 of each year was used to define the population at risk. Only patients receiving long-term outpatient HD were included in the analysis. The study was approved by the FNQ Human Research Ethics Committee (HREC/15/QCH/46-977).

There was a total of 242 cases of culture-confirmed melioidosis in the region during the study period, three (1.2%) of these cases occurred in patients receiving HD. All three cases occurred during the region’s wet season, in patients who had other risk factors for the disease (Table 1). All three patients survived without requiring intensive care unit (ICU) support. During the study period, there were 843 patients who received 3,024 cumulative patient-years of HD. Assuming an efficacy of TMP/SMX prophylaxis of 100%, it would have been necessary to prescribe therapy for 1,008 patient-years to the HD population to prevent one clinical case of (nonfatal) melioidosis.

Characteristics of the patients receiving HD, who developed melioidosis during the study period

Even with access to sophisticated ICU care, the case fatality rate of melioidosis in Australia is almost 10%.5,6 Therefore, it is logical to try to identify strategies to prevent the disease. Seasonal, prophylactic TMP/SMX appears highly effective in reducing disease incidence in HD patients in the Northern Territory of Australia, and clinicians in Darwin have recommended using this approach in tropical Northern Australia and other regions where melioidosis is endemic.4 However, the last 21 years of data collected in HD patients in FNQ do not support implementation of this strategy in our local population. Although, chronic kidney disease is a strong risk factor for melioidosis in FNQ,5 the absolute incidence of the disease in the HD population is too low for any benefit to outweigh the potential risks of TMP/SMX therapy. Over the 21-year period of the study, there were only three cases of melioidosis in the region’s growing HD population (Table 2); all three survived without ICU support.

On December 31 each year.

Although serious side effects were rare in the Northern Territory series, adverse reactions to TMP/SMX are not uncommon.7 When milder side effects are also considered, the numbers needed to harm (NNH) with TMP/SMX prophylaxis has been reported to be as low as 13.7 Although the most commonly reported adverse drug reactions are relatively mild, such as gastrointestinal upset (3.9%; NNH: 26) and rash (3.3%; NNH: 30),7 more serious, life-threatening effects including Stevens–Johnson syndrome, aplastic anemia and anaphylaxis are also well recognized.8–10 In the Darwin series, 1.8% of patients receiving TMP/SMX had severe side effects, including one patient who died after developing drug reaction with eosinophilia and systemic symptoms syndrome for which TMP/SMX was felt to be the likely cause.

In an era of finite health resources, routine TMP/SMX prophylaxis would not be inexpensive: a regimen of one tablet (cost 0.56 Australian dollars) three times a week during the 20 weeks of the local December–April wet season would translate into a cost of AU$33,869 (US$ 25457) to prevent one case of disease in FNQ. Furthermore, TMP/SMX is an important antibiotic in Australia, where community-associated methicillin-resistant Staphylococcus aureus (CA-MRSA) is common and seen more frequently in HD patients.11 Trimethoprim/SMX resistance is presently low in Australian CA-MRSA isolates11 but ongoing responsible antimicrobial stewardship is necessary.

The most likely explanation would seem to be differences in exposure to B. pseudomallei. In the Northern Territory, HD is offered at 14 sites in remote communities, where patients may have more exposure to the soil where B. pseudomallei flourishes.19 In FNQ in 2016 only 15% of the patients received their HD in a remote location and there were even fewer remote patients earlier in the study period (Table 2). Meanwhile, in the Northern Territory, approximately 85% of the HD patients identify as Aboriginal and/or Torres Strait Islander (ATSI),4 compared with the 2016 figure of 70% in FNQ, and it may be that sociocultural factors related to ATSI status contribute to greater exposure to environments that harbor the organism. Finally, the reasons that many patients did not receive TMP/SMX prophylaxis in the Northern Territory study included remoteness, logistical reasons, poor attendance, and refusal of treatment.4 These factors may also have impacted upon the delivery and reinforcement of personal preventive advice,20 while poor attendance and refusal of treatment may have been associated with reduced adherence to this advice.

In conclusion, although TMP/SMX prophylaxis in the Northern Territory of Australia appears highly effective in preventing melioidosis in their adult HD population, recommendations to adopt a similar approach across tropical Northern Australia and other melioidosis-endemic regions appear premature. The strategy may have applicability in selected high-risk patients, particularly those with other risk factors for the disease, who continue to have significant exposure to the organism. However, before the universal implementation of TMP/SMX prophylaxis in HD patients in melioidosis-endemic regions, clinicians providing HD services should carefully weigh the benefits and harms of the approach in their local population.