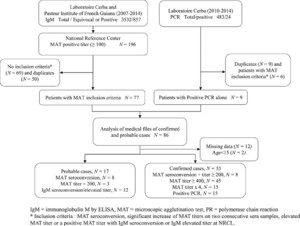 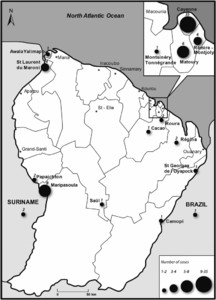 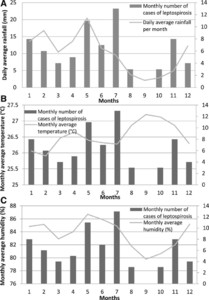 Epidemiology of Human Leptospirosis in French Guiana (2007–2014): A Retrospective Study

Leptospirosis is a worldwide zoonotic bacterial infection with a rising incidence. French Guiana is mostly covered by Amazonian rain forest. Despite a potentially favorable environment, leptospirosis has been barely studied in French Guiana. The objective of this study was to describe the current trends of leptospirosis epidemiology in French Guiana. A cross-sectional study was performed in the two main hospitals of French Guiana. Cases of leptospirosis from 2007 to 2014 were retrospectively identified with a systematic screening of serological and polymerase chain reaction results to classify them as confirmed, probable, or excluded cases. Medical files were reviewed to collect epidemiological data. Among the 72 included patients, 55 (76.4%) cases were confirmed and 17 (23.6%) were probable. The median age was 39 years (range: 16–82 years) and the M/F sex ratio 6.2. Sixty-two (86.1%) patients required hospitalization, including 12 (16.7%) in the intensive care unit. Three (4.2%) patients died. The monthly distribution of cases was correlated with rainfall (P = 0.004) and moisture (P = 0.038). Professional exposure was frequently identified (especially gold mining and construction). Among 16 different serogroups identified by microagglutination test, Icterohaemorrhagiae was the most frequent (38.0%). This study revealed an epidemiology close to that observed in Brazilian regions, and professional and climatic risk factors. The high diversity of serogroups may reveal a complex environmental reservoir requiring further investigations. Only 20% of leptospirosis patients were suspected as such on hospital admission, thus emphasizing the need to inform local physicians.