Seasonal isolation of aquatic microorganisms from 2010 to 2017. 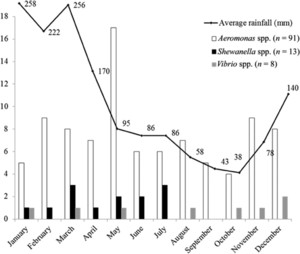 Gram-negative bacilli Vibrio spp., Aeromonas spp., and Shewanella spp. are a major cause of severe waterborne infection. The aim of this study was to assess the clinical and microbiological characteristics and prognosis of patients hospitalized in Reunion Island for a waterborne infection. This retrospective study was conducted in the two university hospitals of Reunion Island between January 2010 and March 2017. Patients diagnosed with a Vibrio, Aeromonas, or Shewanella infection were evaluated. Over the study period, 112 aquatic strains were isolated at Reunion Island: Aeromonas spp. were found in 91 patients (81.3%), Shewanella spp. in 13 patients (11.6%), and Vibrio spp. in eight patients (7.2%). The in-hospital mortality rate was 11.6%. The main sites of infection were skin and soft tissue (44.6%) and the abdomen (19.6%). Infections were polymicrobial in 70 cases (62.5%). The most commonly prescribed empiric antibiotic regimen was amoxicillin–clavulanate (34.8%). Eighty-four percent of the aquatic strains were resistant to amoxicillin–clavulanate and more than > 95% were susceptible to third or fourth generation cephalosporins and fluoroquinolones. After multivariate analysis, the only independent risk factor of in-hospital mortality was the presence of sepsis (P < 0.0001). In Reunion Island, the most commonly isolated aquatic microorganisms were Aeromonas spp. Sepsis caused by aquatic microorganisms was frequent (> 50%) and associated with higher in-hospital mortality. This study suggests that empiric antibiotic regimens in patients with sepsis or septic shock caused by suspected aquatic microorganisms (tropical climate, skin lesion exposed to seawater…) should include broad-spectrum antibiotics (third or fourth generation cephalosporins).

Gram-negative bacilli Aeromonas spp., Vibrio spp., and Shewanella spp. are the most common cause of waterborne infection. Found naturally in aquatic environments,1–3 these microorganisms develop mainly in the warm waters of tropical and subtropical regions.1–3 Of all aquatic bacteria, Aeromonas strains are the most commonly isolated; in some countries, they are detected even in food and running water.1,4–6 Vibrio and Shewanella strains are less common, and their presence in aquatic environments is favored by salt water.2,7,8 Aeromonas spp., Vibrio spp., and Shewanella spp. are responsible for all kinds of infections, especially skin and soft tissue infections.9 Waterborne infections often occur in immunocompromised patients—for instance, those suffering from diabetes or liver disease, or those undergoing immunosuppressive therapy.1–3 Few global epidemiological studies on aquatic bacteria have been published to date,10 and local epidemiological studies are usually limited to one type of infection2,3,7,8 and one type of bacteria.9 To fill this void, we present the most common types of waterborne infections in the Indian Ocean region, in particular in Reunion Island, a French overseas territory with a population of 850,000 inhabitants. The aim of this study was to assess the clinical and microbiological characteristics and prognosis of patients with a waterborne infection.

This observational study was approved by the Institutional Review Board of the Committee of the French Intensive Care Society (CE SRLF17-27) and was declared to the Commission nationale de l’informatique et des liberté (CNIL MR-003, No. 2000694). The need for informed consent was waived because of the observational and retrospective nature of the study.

Selection of the study sample.

This retrospective study was conducted from January 2010 to March 2017 in the two university hospitals of Reunion Island (Félix Guyon and Saint Pierre).

Sepsis was defined as infection with an increase in the Sequential Organ Failure Assessment (SOFA) score ≥ 2 points from baseline.11

When an infection was suspected, empiric antimicrobial therapy based on local guidelines was initiated. The therapy was considered appropriate when all isolated bacteria were susceptible to at least one of the administered drugs after susceptibility testing.

Susceptibility testing was performed using the disk diffusion method based on the criteria of the European Committee on Antimicrobial Susceptibility Testing.12

Risk factors found to be predictive of in-hospital mortality in the bivariate analysis with P < 0.05 were entered into a multivariate logistic regression analysis using backward selection with a criterion of P < 0.05. Collinearity between independent factors was investigated. When identified, the most clinically relevant factor was chosen for use in the multivariate model. A P value < 0.05 was considered significant. Analysis was performed using SPSS statistical software (8.2, Cary, NC).

Over the study period, 156 patients were hospitalized with a positive microbiological sample for Aeromonas spp., Shewanella spp., or Vibrio spp. Among these patients, 44 were excluded (35 were < 18 years old and nine were colonized). Overall, 112 aquatic strains were isolated at Reunion Island in 112 infected patients: The majority of infections occurred in Reunion Island (N = 107, 95.5%). Four infections (3.6%) developed in Madagascar after swimming in salt water and one (0.9%) did so in the Comoros Archipelago (0.9%).

Clinical characteristics of the 112 patients with waterborne infections

Distribution of microorganisms and sites of infection.

Results are expressed as number (%).

Results are expressed as n (%).

In the study cohort, more than 95% of aquatic strains were susceptible to a third or fourth generation cephalosporin, 94.3% to piperacillin/tazobactam, 96.2% to ciprofloxacin, and 96.3% to meropenem—with no significant difference between Aeromonas spp., Shewanella spp., and Vibrio spp. (Table 4). Susceptibility to amoxicillin–clavulanate was 15.9% and was higher in the Vibrio spp. group than in the other two groups (P < 0.0001) (Table 4).

Results are expressed as no. positive/no. tested (%).

The rate of appropriate empiric antimicrobial therapy was 54.8%.

Sixty patients had sepsis (53.6%), 22 had septic shock (19.6%), and 29 were hospitalized in intensive care unit (25.9%), with no significant difference between the three groups of microorganisms.

The most frequently isolated aquatic bacteria in our study were Aeromonas spp., a finding that was also reported by Mc Auliffe et al.10 Comorbidities such as diabetes, alcoholism, neoplasia, and immunosuppression were common in our patients, as has been observed elsewhere.2,3,9,10

In our series, 38% of patients with a Vibrio infection had a cutaneous entry point after contact with seawater. This is a common finding in studies that specifically evaluate non-cholera Vibrio infections.13 Skin and soft tissue infections were the most common in our series, with an incidence comparable to that found in the study by Lamy et al.,14 which focused specifically on Aeromonas infections (44%). However, the incidence of skin and soft tissue infection was significantly lower than that reported by Mc Auliffe et al. (80%).11

Whereas the very low incidence of waterborne gastroenteritis in our study (< 1%) is similar to that found by Mc Auliffe et al.10 (5.4%), it is much lower than that reported by Lamy et al.14 (19%). This low incidence may be because of the fact that unlike the situation for children, the disease is not usually severe in adults, and hence rarely leads to hospitalization.15

In sensitivity analysis, only a small proportion of the isolated strains were sensitive to amoxicillin–clavulanate (16%), which makes sense given that the majority of these strains were Aeromonas spp.14,16 However, this poses a therapeutic problem because the most of the waterborne infections are skin and soft tissue infections, these being often treated probabilistically with amoxicillin–clavulanate. In addition, waterborne infections are most often polymicrobial, and there are no specific signs associated with aquatic bacteria.2,10 In cases of severe waterborne skin and soft tissue infection, antibiotic therapy should include broad-spectrum antibiotics such as third or fourth generation cephalosporins, which are effective on these bacteria in the vast majority of cases. In fact, antibiotic therapy may require a combination of molecules because infections are often polymicrobial, but also because Aeromonas strains can produce AmpC β-lactamase, which has been shown to occur frequently.17

Shewanella strains are most often susceptible to broad-spectrum antibiotics, such as third or fourth generation cephalosporins and carbapenems. It should be noted, however, that these strains can produce oxacillinase, which makes them resistant to carbapenems18 and may, therefore, lead to therapeutic failure.19 The study by Wong et al. suggests that fluoroquinolones can lead to a decrease in mortality from Vibrio infections.20 In the case of patients with marine injury with sepsis or septic shock, the use of fluoroquinolone should be discussed. Cefepime may be an interesting molecule for the treatment of Aeromonas infections. Indeed, cefepime is little affected by cephalosporinase, and minimal inhibitory concentrations of the molecule required for the treatment of Aeromonas and Shewanella infections are very low.20–22

Mc Auliffe et al. did not evaluate the prognosis of patients in their study. By contrast, we found that waterborne infections are often severe: sepsis was present in more than 50% of the examined cases, often leading to hospitalization in intensive care (25.9%), with an in-hospital mortality rate of 11.6%. The different causative organisms did not seem to be associated with significantly different virulence. Nevertheless, Wu et al.23 have found that mortality is higher with Aeromonas dhakensis strains than with other Aeromonas strains. Similarly, mortality has been found to be higher with Vibrio vulinificius strains than with other Vibrio strains,24 and S. algae strains have been shown to be more virulent than S. putrefaciens strains.25

This study has many limitations. Its retrospective nature is clearly a weakness. Moreover, the number of infections is relatively low, which limits the power of statistical analysis. The typing of the strains may be criticized because in most of the cases it was performed phenotypically, and hence without genetic analysis. Indeed, it has been shown that many strains identified as S. putrefaciens by MALDI-TOF are identified as S. algae after analysis of 16S RNA.26

This study was performed on a tropical island in the Indian Ocean and cannot provide any definitive conclusions for other much larger island continents, such as Australia, and other tropical regions.