LPS-binding protein (LBP) is positively associated with cytokine response within the same compartment. (A) Within maternal peripheral blood, LBP levels were higher in those mothers who had detectable IL-8 within peripheral blood. *P = 0.02. (B and C) Within cord blood, LBP levels were positively associated with those pregnancies displaying detectable IL-8 or TNFα in cord blood. *P < 0.02. 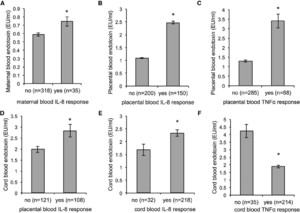 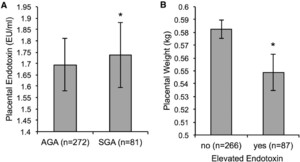 Endotoxin at the Maternal–Fetal Interface in a Resource-Constrained Setting: Risk Factors and Associated Birth Outcomes

Low- and middle-income countries (LMICs) carry a high burden of infectious diseases associated with impaired gut integrity, leading to microbial translocation. Pregnancies in this setting are at high risk of fetal growth restriction (FGR). We examined the association among specific risk factors for impaired gut integrity (schistosomiasis, hookworm infection, and alcohol consumption), blood endotoxin levels, and FGR. Endotoxins, lipopolysaccharide-binding proteins (LBPs), and cytokines were measured in blood from women at 32 weeks gestation, the maternal–fetal interface (MFI) at delivery, and cord blood at delivery. Resolution of schistosomiasis had no impact on endotoxin levels; however, maternal hookworm infection and alcohol consumption were associated with modest increases in endotoxin at the MFI. Cytokines responses within the maternal peripheral blood and blood from the MFI were positively associated with endotoxins, but many cord blood cytokines were negatively associated with endotoxins. Newborns with FGR also had higher levels of endotoxins at the MFI. Risk factors for microbial translocation may lead to increased levels of endotoxins at the MFI, which may contribute to poor growth in utero.