Maximum likelihood tree based on a 430-bp fragment of the NS5 gene of Powassan (lineage I) and deer tick virus (lineage II). The phylogenetic tree was produced with 100 bootstrap replications and branch length is proportional to genetic distance using BioNJ algorithm analyses. Louping ill virus (KF056331), West Nile virus (DQ164202), and Dengue virus (KX274130) were used as outgroups. The ruler shows the branch length for a pairwise distance equal to 0.05.

The distribution of wildlife from which serum samples were tested for antibodies to Powassan virus (POWV) and West Nile virus (WNV) by plaque reduction neutralization test in southern Ontario, Canada, 2015 to 2016. This figure appears in color at www.ajtmh.org. 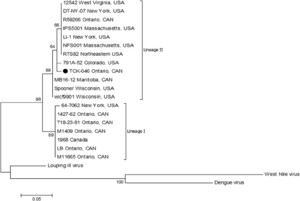 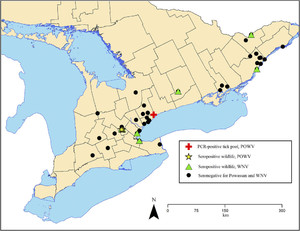 Powassan Virus and Other Arthropod-Borne Viruses in Wildlife and Ticks in Ontario, Canada

Powassan virus (POWV) is a tick-borne zoonosis maintained in natural enzootic cycles between ixodid ticks and wild mammals. Reported human cases have increased in recent years; these infections can be fatal or lead to long-term neurologic sequelae. However, both the geographic distribution and the role of common, potential mammalian hosts in POWV transmission are poorly understood, creating challenges to public health surveillance. We looked for evidence of POWV infection among candidate wildlife host species and ticks collected from mammals and birds in southern Ontario. Tissues (including blood) and ticks from trapped wild mammals were collected in the summers of 2015 and 2016. Ticks removed from dogs in 2015–2016 and wildlife diagnostic cases from 2011 to 2013 were also included. Tissue and tick (Ixodes spp.) homogenates were tested for POWV by reverse transcriptase–polymerase chain reaction (RT-PCR). In addition, sera from wild mammals were tested for antibodies to POWV, West Nile virus (WNV), and heartland virus (HRTV) by plaque reduction neutralization test. All 724 tissue samples were negative for POWV by RT-PCR. One of 53 pools of Ixodes cookei (among 98 total tick pools) was RT-PCR positive for deer tick virus (POWV) lineage. Antibodies to POWV and WNV were detected in 0.4% of 265 and 6.1% of 264 samples, respectively, and all of 219 serum samples tested negative for anti-HRTV antibodies. These results reveal low POWV detection rates in southern Ontario, while highlighting the challenges and need for continued efforts into understanding POWV epidemiology and targeted surveillance strategies.