Maximum likelihood phylogenetic trees of Patois serogroup within Orthobunyavirus genus. The nucleoprotein (A), glycoprotein (B), and RdRP (C), all based on LG + I + G4 model amino acids substitution model. Phylogenies are midpoint rooted and with proportional branches for clarity of presentation. The scale bar indicates evolutionary distance in numbers of substitutions per amino acid substitutions/site, and the principal bootstrap support levels were indicated. The Patois virus strains sequenced in this study are highlighted in light grey and in red (online). This figure appears in color at www.ajtmh.org.

Pairwise genetic similarities (amino acid p-distance) of Patois serogroup compared with other orthobunyavirus groups based on the coding sequencing of N protein (A), glycopolyprotein (B), and RdRp (C). This figure appears in color at www.ajtmh.org.

Pairwise genetic similarities (amino acid p-distance) of ERV compared with other orthonairovirus groups based on the coding sequencing of N protein (A), glycopolyprotein (B), and RdRp (C). This figure appears in color at www.ajtmh.org. 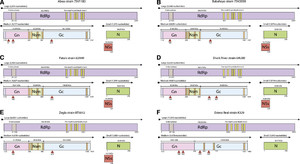 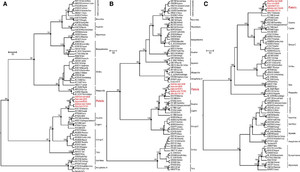 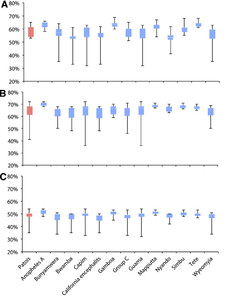 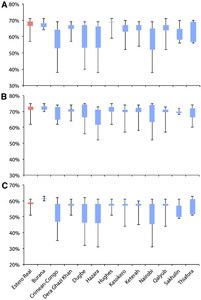 Genetic Characterization of the Patois Serogroup (Genus Orthobunyavirus; Family Peribunyaviridae) and Evidence That Estero Real Virus is a Member of the Genus Orthonairovirus

Estero Real virus (ERV) was isolated in 1980 from Ornithodoros tadaridae ticks collected in El Estero Real, Sancti Spiritus, Cuba. Antigenic characterization of the isolate based on serological methods found a relationship with Abras and Zegla viruses and, consequently, the virus was classified taxonomically within the Patois serogroup. Given the fact that genetic characterization of Patois serogroup viruses has not yet been reported and that ERV is the only virus within the Patois serogroup isolated from ticks, we recently conducted nearly complete genome sequencing in an attempt to gain further insight into the genetic relationship of ERV with other Patois serogroup viruses and members of Peribunyaviridae family (Bunyavirales order). With the exception of ERV, our sequencing and phylogenetic studies revealed the close relationship of the Patois serogroup viruses to each other, forming a clear divergent clade from other members of the Orthobunyavirus genus (Peribunyaviridae family). Notably, our analysis also revealed that ERV forms a monophyletic clade that is closely related to species of the Orthonairovirus genus (Nairoviridae family) in all the genome segments. In light of these findings, we believe that the taxonomic classification of ERV should be revised.