Geographic distribution and allocation of EAs in different categories of treatment coverage. Global positioning system coordinates were not available for one EA in the first round. Group designations apply to the second round only but are shown in the first for comparison. Note that the plurality of villages was not treated in the first round, whereas in the second 41–60% was the most common level of coverage. EA = enumeration area. This figure appears in color at www.ajtmh.org. 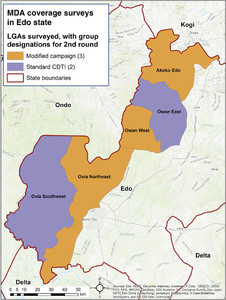 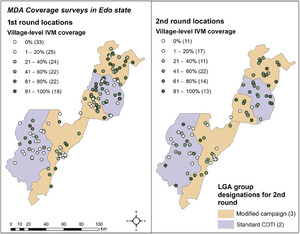 The western region of Edo state in southern Nigeria is highly endemic for onchocerciasis. Despite years of mass drug administration (MDA) with ivermectin (IVM), reports suggest persistently high prevalence of onchocerciasis, presumably because of poor coverage. In 2016, twice-per-year treatment with IVM (combined with albendazole for lymphatic filariasis in the first round where needed) began in five local government areas (LGAs) of Edo state. We undertook a multistage cluster survey within 3 months after each round of MDA to assess coverage. First-round coverage was poor: among 4,942 people of all ages interviewed from 145 clusters, coverage was 31.1% (95% confidence intervals [CI]: 24.1–38.0%). Most respondents were not offered medicines. To improve coverage in the second round, three LGAs were randomized to receive MDA through a “modified campaign” approach focused on improved supervision and monitoring. The other two LGAs continued with standard MDA as before. A similar survey was conducted after the second round, interviewing 3,362 people in 87 clusters across the five LGAs. Coverage was not statistically different from the first round (40.0% [95% CI: 31.0–49.0%]) and there was no significant difference between the groups (P = 0.7), although the standard MDA group showed improvement over round 1 (P < 0.01). The additional cost per treatment in the modified MDA was 1.6 times that of standard MDA. Compliance was excellent among those offered treatment. We concluded that poor mobilization, medicine distribution, and program penetration led to low coverage. These must be addressed to improve treatment coverage in Edo state.