Number of reported cases of guinea worm disease in humans by year: 1989–2017. This figure appears in color at www.ajtmh.org.

Distribution of 30 indigenous cases of dracunculiasis in humans reported during 2017. This figure appears in color at www.ajtmh.org. 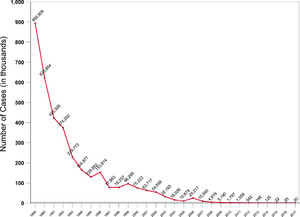 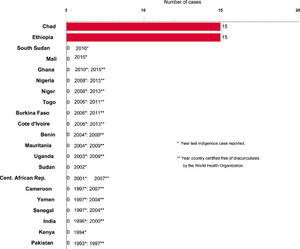 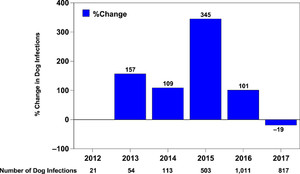 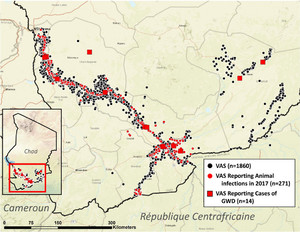 Dracunculiasis Eradication: Are We There Yet?

This report summarizes the status of the global Dracunculiasis Eradication Program as of the end of 2017. Dracunculiasis (guinea worm disease) has been eliminated from 19 of 21 countries where it was endemic in 1986, when an estimated 3.5 million cases occurred worldwide. Only Chad and Ethiopia reported cases in humans, 15 each, in 2017. Infections of animals, mostly domestic dogs, with Dracunculus medinensis were reported in those two countries and also in Mali. Insecurity and infections in animals are the two main obstacles remaining to interrupting dracunculiasis transmission completely.