Number and results of telephone interviews of the patients excluded from the analysis because of loss to follow-up before the completion of 2 years of observation. 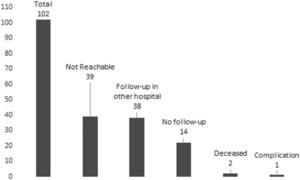 Watch and Wait Approach for Inactive Echinococcal Cyst of the Liver: An Update

Human cystic echinococcosis (CE) is a chronic, complex and neglected infection causing severe disease in humans. Hepatic CE cysts are detected and classified mainly by using ultrasound. Expert opinion and published data suggest that uncomplicated inactive liver cysts do not require treatment and only need to be monitored over time (“Watch and Wait”). Here we update our findings as published in 2014 on the “Watch and Wait” approach applied to inactive, asymptomatic cysts of the liver to keep the medical community informed. Clinical data of patients who accessed the World Health Organization Collaborating Center for CE at the University of Pavia-San Matteo Hospital Foundation from January 1991 to October 2017 were analyzed. Inclusion criteria were presence of one or more inactive uncomplicated cysts in the liver (CE4 or CE5), without any history of previous treatment, and an ultrasound-based follow-up of at least 24 months. Fifty-three patients with 66 inactive cysts fulfilled the inclusion criteria. Of these, 11 patients are newly described here; 37 were part of our previously described cohort and the follow-up for 17 of them was further extended; and five were excluded from the previously published analysis as their follow-up was too short, but could be included now. Without the need for treatment and without development of complications, 98.5% of cysts remained inactive over time. In only one patient (1.9% of patients), a reactivation of one cyst (1.5% of cysts) was observed.