Prevalence of hepatomegaly, splenomegaly, periportal thickening, and enlarged portal vein as demonstrated on ultrasonography in participants in year 1, 3, and 5 in the community-wide treatment and school-based treatment arms (* indicates comparison possessed P < 0.05 and ** indicates that comparison had P < 0.01).

Pediatric quality-of-life (PedsQL) scores from 0 to 100 in participants in year 1, 3, and 5 in the community-wide treatment and school-based treatment arms in the four categories of physical, emotional, social, and school and total score (* indicates comparison possessed P < 0.05 and ** indicates that comparison had P < 0.01).

The relationship between malaria infection, anemia, and physical fitness participants in year 1, 3, and 5 in the community-wide treatment and school-based treatment arms. Hgb = hemoglobin, VO2 = volume of oxygen consumption (* indicates comparison possessed P < 0.05 and ** indicates that comparison had P < 0.01). 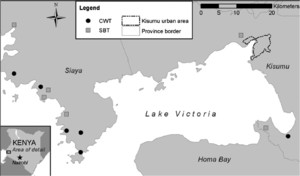 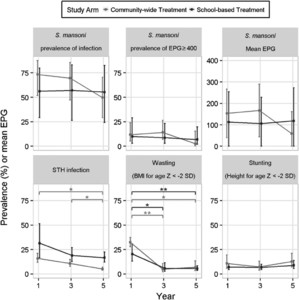 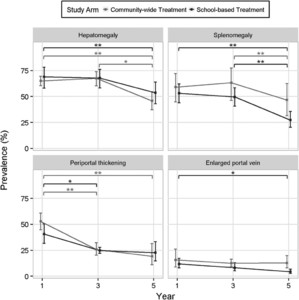 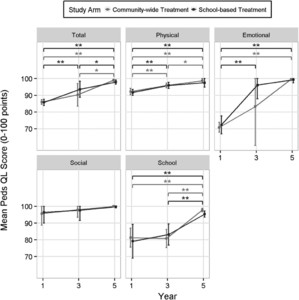 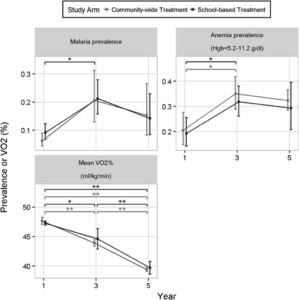 Schistosoma mansoni Mass Drug Administration Regimens and Their Effect on Morbidity among Schoolchildren over a 5-Year Period—Kenya, 2010–2015

Schistosomiasis control programs are designed to reduce morbidity by providing mass drug administration (MDA) of praziquantel to at-risk populations. We compared morbidity markers between two cohorts of Kenyan schoolchildren that initially had high prevalence of Schistosoma mansoni infections. One cohort (N = 416 at year 1) received four rounds of annual MDA in a community-wide treatment (CWT) strategy. The other cohort (N = 386 at year 1) received school-based treatment (SBT) every other year over the 4-year period. We measured infection with S. mansoni and soil-transmitted helminths (STH) as well as subtle morbidity markers at year 1, year 3, and year 5 and compared cohorts with mixed models after controlling for age and gender. At year 5, neither overall S. mansoni prevalence nor the prevalence of high infection–intensity S. mansoni infection was significantly reduced compared with baseline in either the CWT cohort (N = 277 remaining) or the SBT cohort (N = 235 remaining). Nevertheless, by year 5, children in both cohorts demonstrated significant decreases in wasting, ultrasound-detected organomegaly, and STH infection along with significantly improved pediatric quality-of-life scores compared with year 1. Stunting did not change over time, but children who were S. mansoni egg–positive at year 5 had significantly more stunting than children without schistosomiasis. The only significant difference between arms at year 5 was a lower prevalence of STH infections in the CWT group.