Map of lesion collection sites included in this study. This figure appears in color at www.ajtmh.org. 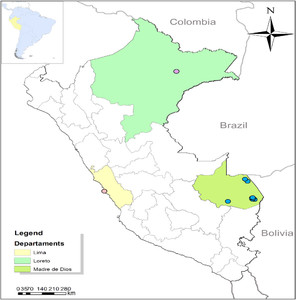 Cutaneous leishmaniasis is endemic to South America where diagnosis is most commonly conducted via microscopy. Patients with suspected leishmaniasis were referred for enrollment by the Ministry of Health (MoH) in Lima, Iquitos, Puerto Maldonado, and several rural areas of Peru. A 43-question survey requesting age, gender, occupation, characterization of the lesion(s), history of leishmaniasis, and insect-deterrent behaviors was administered. Polymerase chain reaction (PCR) was conducted on lesion materials at the Naval Medical Research Unit No. 6 in Lima, and the results were compared with those obtained by the MoH using microscopy. Factors associated with negative microscopy and positive PCR results were identified using χ2 test, t-test, and multivariate logistic regression analyses. Negative microscopy with positive PCR occurred in 31% (123/403) of the 403 cases. After adjusting for confounders, binary multivariate logistic regression analyses revealed that negative microscopy with positive PCR was associated with patients who were male (adjusted odds ration [OR] = 1.93 [1.06–3.53], P = 0.032), had previous leishmaniasis (adjusted OR = 2.93 [1.65–5.22], P < 0.0001), had larger lesions (adjusted OR = 1.02 [1.003–1.03], P = 0.016), and/or had a longer duration between lesion appearance and PCR testing (adjusted OR = 1.12 [1.02–1.22], P = 0.017). Future research should focus on further exploration of these underlying variables, discovery of other factors that may be associated with negative microscopy diagnosis, and the development and implementation of improved testing in endemic regions.