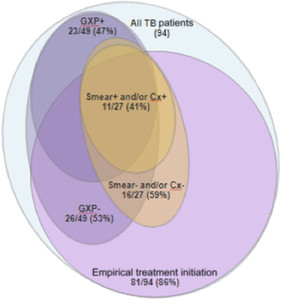 Human immunodeficiency virus (HIV) infection is a major risk factor for the development of active tuberculosis (TB), one of the deadliest infectious diseases globally. The high mortality associated with the disease can be reduced by early diagnosis and prompt antituberculous treatment initiation. Facilities in TB-endemic regions are increasing the use of nucleic acid amplification (e.g., GeneXpert), which provides rapid results but may have suboptimal sensitivity in HIV-associated TB. Our objective was to evaluate the current practices for TB diagnosis at Edendale Hospital, a large regional hospital in KwaZulu-Natal, South Africa—a TB-endemic region with high HIV prevalence. In this cross-sectional study, all adult inpatients newly started on TB treatment at Edendale were identified over a 6-week period. Demographics, clinical information, diagnostic test results, and outcomes were documented. Pulmonary TB (PTB), extrapulmonary TB (EXTB), and PTB + EXTB were defined as disease evidence in the lungs, other organs, or both, respectively. Ninety-four cases were identified, of which 83% were HIV-associated. Only 30% of all TB patients were microbiologically confirmed, consisting of 7/16 (44%) HIV-uninfected and 21/78 (27%) HIV-infected TB patients. Smear microscopy and mycobacterial culture were seldom ordered. Ultrasound was performed in about one-third of suspected EXTB cases and was valuable in identifying abdominal TB. In this clinical setting with a high incidence of HIV-associated TB, TB diagnosis was more commonly based on clinical assessment and imaging results than on mycobacterial gold standard test confirmation.