Location of the raw seafood consumption by the three patients. (A) First patient, (B) second patient, (C) third patient, and (D) Daegye Port. This figure appears in color at www.ajtmh.org.

Dendrogram and pulsed-field gel electrophoresis pattern of the four strains isolated from the three patients and the one strain from seawater. All isolates exhibit > 95% similar profiles (according to Dice coefficients). 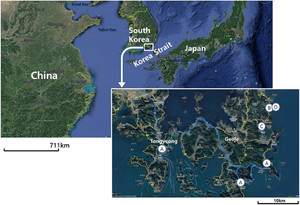 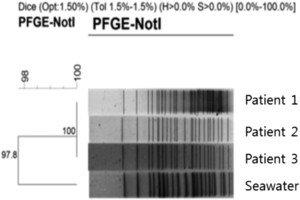 Cholera Outbreak due to Raw Seafood Consumption in South Korea, 2016

Three cases of cholera occurred in South Korea during a period of three weeks in August 2016. All the cases were associated with the consumption of raw seafood in southern coastal area of South Korea. Epidemiologic investigations were performed to track the spread of cholera, including persons in contact with the cholera patients, seafood, and seawater from the fish tank and marine environments. A microbiological investigation demonstrated that cholera isolated from the three patients and a seawater sample at the Korea Strait showed identical serotype (O1 Ogawa), biotype (El tor), and toxin (ctx-positive). Pulsed-field gel electrophoresis analysis showed that the three clinical strains are identical (100%) and shared 97% identity with the seawater sample.

The Vibrio species are gram-negative, facultative aerobic, and halophilic rods, and 12 species have been reported to be human pathogens.1 Outbreaks by Vibrio species, such as Vibrio cholera, Vibrio parahaemolyticus, and Vibrio vulnificus, frequently occur in countries with dietary habits of raw or undercooked seafood consumption.2

In South Korea, there had been several cholera outbreaks since 1980 and no domestic cholera outbreak has occurred since 2002. In 2016, three cases of cholera were reported at the Korea Center for Disease Control and Prevention as a nationally notifiable disease during August. All cases were associated with raw seafood consumption within the cholera incubation period. The first patient (Patient 1) ate raw seafood at three restaurants with his three family members while he traveled to the Tongyeong and Geoje areas 2 days before he presented symptoms on August 9. The second patient (Patient 2) ate a raw mackerel (which was caught in the Geoje area) with 12 acquaintances 2 days before she presented symptoms on August 15. The third patient (Patient 3) ate assorted raw fish with three acquaintances at a restaurant in the Geoje area 2 days before he presented symptoms on August 21. All 18 persons who ate the same raw seafood with the three patients did not exhibit diarrhea and showed negative results for the microbiological examination of Vibrio cholerae from rectal swabs (Table 1).

Characteristics of the patients with Vibrio cholera in 2016, South Korea

Clinically, first and second patients were treated with fluid replacement because of more than 10 occurrences of watery diarrhea, and then fully recovered on eighth and ninth day after the onset of diarrhea, respectively. The third patient showed small amount of diarrhea, anorexia, and vomiting as initial symptoms on August 21, and visited an outpatient clinic on August 23. The next day, he had yellowish diarrhea with abdominal pain and myalgia, six to seven times a day and was transferred to an intensive care unit via an emergency room on August 25. After that he progressed rapidly to acute renal failure showing decreased urine output and blood pressure on August 26 and was treated with continuous renal replacement therapy, and then discharged after recovery on August 31.

Epidemiologic investigations were performed to track the spread of cholera, including persons in contact with the cholera patients, seafood and seawater from the fish tank and marine environments. The three patients ate raw seafood in regions within 30 km of the Geoje and Tongyeong areas, which are southern coastal regions facing the Korean Strait (Figure 1).

Human samples were collected from stool or rectal swabs of the three patients, 24 people who shared the raw seafood, eight cooks, and 217 contacts of the three patients. Environmental samples were also collected from 47 raw seafood sources, 25 cooking tools, 8 drinking water sources, and 6 fish-tank waters. We also collected 18 samples of marine plankton and 113 samples of ballast water from ships passing cholera-endemic countries to identify opportunities for V. cholerae influx from other countries. Seawater samples were collected at 231 coastal areas of South Korea, including the Geoje and Tongyeong areas. More than 500 ML of seawater was collected within 1 m of surface water and plankton was collected by towing nets on the ocean at the depth of around 10 meters from surface seawater using 200 μm mesh. Zooplankton was collected separately. The seawater and drinking water samples were filtered through 0.45-µm–pore size nitrocellulose membranes (Millipore Corp., Bedford, MA). After filtration, the filtered nitrocellulose membranes were incubated in 5 mL alkaline peptone water (pH 8.4, 1% NaCl) at 37°C for 12 hours.

Polymerase chain reaction (PCR) was used to screen V. cholerae with species-specific genes (hlyA)3 and confirm the presence of toxin genes (ctx). Serotyping of V. cholerae was carried out according to the instructions of the manufacturer (Denka Seiken, Tokyo, Japan and Difco, Sparks, MD).

Vibrio cholerae were isolated from stool specimens of the three patients. No specimen had a positive result for V. cholerae from human samples, environmental samples, marine plankton samples, and ballast water. In total, 1,776 seawater samples were collected, and one sample showed a positive culture result. The positive seawater sample was collected from Daegye Port, which is located in the west section of the Geoje area (Figure 1). Four positive V. cholerae strains from three human samples and one seawater sample showed an identical serotype O1 Ogawa, biotype El tor, and positive ctx band. PFGE analysis showed that the three human strains were identical (100%) and shared 97.8% identity with the seawater sample (Figure 2).

Our finding is the first report (confirmed experimentally) that the three cases of cholera in South Korea in 2016, occurred by seawater transmission through epidemiologic investigations which confirmed that V. cholerae from the seawater at the coastal area near the affected cases showed same serotype (O1, Ogawa) and biotype (El tor) and identical PFGE pattern with V. cholerae from the patients.

We assumed three possible transmission modes to search the potential infection route: contact with contaminated hands, consumption of the same contaminated food by an infected cook, and consumption of common seafood via V. cholerae in seawater. The first and second routes were ruled out by investigating the history of food consumption and all persons in contact with the patients within the maximum incubation periods. To investigate the third route, we examined seawater using the routine national seawater survey program for Vibrios (National VibrioNet survey) and adding the regions of Geoje and Tongyeong, based on the fact that affected patients ingested raw seafood in these areas. As a result, we identified V. cholerae from seawater at the coastal area near the affected cases.

Marine environments are a key component and ecologic factor of cholera growth. The dynamics of V. cholera are associated with seawater temperature, salinity, pH, and plankton.5 Although Vibrios commonly need NaCl for growth, the optimal salinity differs according to their species. V. cholera has an optimal salinity of 0.5% NaCl, which is lower than that of V. vulnificus or V. parahaemolyticus.6 Optimal conditions for the culturability of V. cholerae are known to be 25–30°C for temperature and 15–20 psu for salinity.7 Therefore, V. cholerae has been isolated mainly from marine, estuarine, and fresh surfaces.8

The data regarding the seawater temperature and salinity of the South Korea coast showed increased temperature and decreased salinity on August 2016 compared with the previous year. The weather in Korea in 2016 was extremely hot, particularly in August, and the seawater temperature in the Tongyeong area was the highest recorded in 5 years. Moreover, a downpour in the Yangtze River, which occurred in July 2016, brought a huge influx of seawater with a lower salinity into the Korean Strait, and the amount of the influx water was the highest in 7 years. Along with the weather change, these conditions are considered to contribute to an optimal environment for the growth of V. cholerae.9

Large cholera outbreaks mainly have occurred in regions with poor water and sanitation conditions. But, these cholera cases in South Korea occurred sporadically in different regions. It can be considered as a possible explanation that the cholerae in the viable but nonculturable (VBNC) state, which are ubiquitous of marine environment and remain in a dormant state, would proliferate in some fish and shellfish under certain favorable conditions, but not lead large outbreak under good sanitation conditions.10,11 However, we tested all the samples at 37°C and in greater than 1% salinity media that could not cause VBNC form of V. cholerae, thus we did not look for VBNC V. cholerae in this study.

Meanwhile, it is noticeable that V. cholerae was not isolated from any contact person of the three cases and all three cases have occurred in old people. Vibrio cholerae has relatively low infectivity than other bacteria, and more than 1 billion bacteria are needed to cause infection. However, the infectious dose drops to 104 from 108 by neutralizing stomach acidity, and it is known that gastric acidity declines as people age.12 Therefore, we can suggest that decreased gastric acidity according to old age might contribute to the vulnerable state for cholera infection in spite of low inoculum dose, which generally do not cause infection in healthy people.

Out study supports the practical evolution of the cholera outbreak model from the fecal–oral route to a complex ecologic model as an emerging infectious disease13 and highlights the importance of seawater as a transmission vehicle. The seawater temperature increase and salinity change caused by global climate change could predict a possible increase in cholera outbreaks caused by raw seafood consumption. Accordingly, risk evaluations of cholera by active surveillance of marine environments will be required.