Maximum likelihood single-nucleotide polymorphism (SNP) phylogeny distances in the matrix correspond to the violet encircled clade of isolates 16-454 (from patient), 16-419A and 16-419B (from garden soil), and H5524 and H5525 (epidemiologically unrelated controls). Courtesy of Centers for Disease Control and Prevention, Special Bacteriology Reference Laboratory. 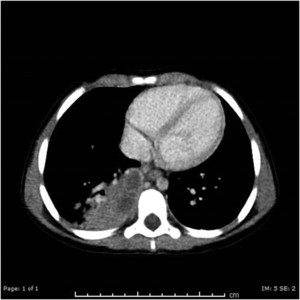 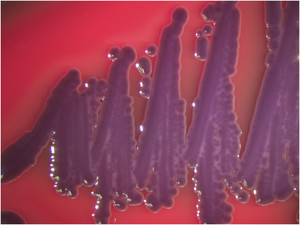 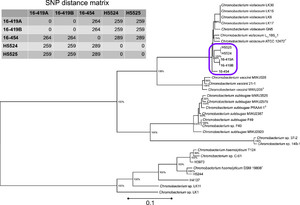 Chromobacterium violaceum is a rare, potentially serious pathogen. Most clinicians have no experience with its clinical appearance or treatment. We describe a case of a child presenting with necrotizing pneumonia caused by C. violaceum. We describe case complexities, including the need for a multidisciplinary approach to diagnosis and treatment.

Community-acquired necrotizing pneumonia most commonly occurs after bacterial infections (e.g., Staphylococcus aureus or Streptococcus pneumoniae) and is increasingly recognized as a complication of viral infections (e.g., influenza).1 It is an uncommon but potentially severe illness. Although surgical drainage and prolonged administration of antibiotics are often necessary, the outcome is usually favorable.1 Occasionally, more severe and unusual pathogens might be implicated that require more aggressive treatment and reveal previously unnoted immune deficiencies. This report concerns a previously healthy child presenting with necrotizing pneumonia caused by Chromobacterium violaceum that led to a diagnosis of underlying chronic granulomatous disease (CGD).

In September 2016, a previously healthy female aged 6 years presented to the emergency department (ED) at Hospital A in southeastern Louisiana with a 2-day history of fever with a maximum temperature of 40°C (104°F), anorexia, nonbloody emesis, and diffuse and crampy abdominal pain. Physical examination revealed tachycardia and right-side abdominal tenderness. Laboratory testing was remarkable for an elevated white blood cell count of 37.4 × 103/μL and 21% band forms. An abdominal ultrasound did not visualize her appendix but was otherwise normal. The patient was transferred for possible appendicitis from Hospital A’s ED to the regional children’s hospital’s ED 4 hours after the patient presented to Hospital A. A computed tomography scan at the children’s hospital indicated a normal appendix but revealed a right lower lobe necrotizing pneumonia with septic nodules in both lungs (Figure 1). The patient was admitted to the pediatric intensive care unit (PICU) for hypotension that was unresponsive to intravenous (IV) fluids.

The patient was continued on IV fluids; hydrocortisone, vasopressin, epinephrine, vancomycin, and ceftriaxone were added. Twenty-seven hours after PICU admission, her condition deteriorated into respiratory failure. A chest radiograph indicated bilateral pleural effusions. She was intubated and a pigtail drain was placed in the right pleural space that produced 35 mL of blood-tinged fluid. Abdominal distention was also noted, and an ultrasound revealed hepatomegaly, periportal edema, and moderate ascites; a peritoneal drain was placed. Piperacillin–tazobactam was added to the regimen. The patient continued to decompensate, as evidenced by persistent hypotension, bradycardia, and hypoxemia despite increasing ventilator peak end expiratory pressure. After four episodes of cardiopulmonary resuscitation, she was placed on extracorporeal membrane oxygenation (ECMO).

A culture of endotracheal tube aspirate obtained during intubation grew C. violaceum (Figure 2); blood, peritoneal fluid, and pleural fluid cultures did not produce bacterial growth. The hospital infectious diseases service was consulted for antibiotic recommendations and based on culture results, the patient’s regimen was changed empirically to linezolid, levofloxacin, and trimethoprim–sulfamethoxazole (TMP-SMX). Subsequent minimum inhibitory concentration testing (μg/mL) of the C. violaceum isolate revealed the following results: ciprofloxacin (≤ 0.5), TMP-SMX (≤ 0.5/9.5), meropenem (≤ 1), and piperacillin–tazobactam (≤ 4/4). Her regimen was then changed to IV meropenem and ciprofloxacin for 3 weeks, followed by oral ciprofloxacin and TMP-SMX for 3 months.

During her PICU stay, the patient required ECMO for 14 days, followed by 8 days of mechanical ventilation. She also required continuous renal replacement therapy, secondary to ECMO-induced acute kidney injury, followed by dialysis for 24 days. The hospital course was further complicated by pleural hemorrhage, necessitating emergent right lower lobe lobectomy, cardiac tamponade secondary to hemopericardium and requiring pericardial drain placement, a thrombus in the right femoral artery needing embolectomy, urethral prolapse secondary to extended urinary catheter placement, critical illness neuropathy resulting in left foot drop and gait abnormalities, and need of multiple blood and platelet transfusions. On hospital day 39, the patient was transferred from PICU to the regular pediatric floor. She was moved to inpatient rehabilitation on hospital day 42, and after 12 days of rehabilitation, she was discharged home with follow-up appointments with allergy and immunology, infectious diseases, nephrology, physical medicine and rehabilitation, cardiology, urology, hematology and oncology, and physical therapy.

As a result of severe and unusual infection, an immunologic evaluation was conducted. A test for human immunodeficiency virus was negative, and neutrophil burst assay was markedly low (2%; normal: > 30%). Genetic testing (GeneDx, Gaithersburg, MD) revealed homozygosity at the c.75_76delGT coding DNA of the NCF1 gene, a pathogenic variant causing autosomal recessive CGD.2 Parents and two siblings were tested by neutrophil burst assay and reported to have functionally normal levels; no genetic tests were performed on the patient’s family members.

Interview with the patient’s parents revealed that within the common incubation period for C. violaceum (3–14 days),3 the only new exposure the patient had was to landscaping soil the family had delivered to their yard approximately 1 week before the illness onset. The parents reported that the patient played in and around the new soil multiple times before her illness. The patient also regularly gardened in two plots of their yard. The Louisiana Department of Health was asked to assist with an environmental investigation, and soil samples were obtained from multiple locations in the patient’s yard approximately 7 weeks after the patient was hospitalized. Chromobacterium violaceum was recovered from garden soil samples but not from the new landscaping soil samples. Isolates were submitted to the Special Bacteriology Reference Laboratory at the Centers for Disease Control and Prevention and confirmed to be C. violaceum; however, the patient and garden soil isolates were unrelated by whole genome sequencing (WGS) analysis, with 264 single-nucleotide polymorphisms (SNPs) differentiating them (Figure 3).

The first case of C. violaceum human infection was reportedly identified in 1927.4 Chromobacterium violaceum is a gram-negative, facultative anaerobe that dominates a variety of ecosystems in tropical and subtropical regions.5 Reports of human infection are rare with fewer than 200 cases reported in the literature. In the United States, the southeast is the most affected region where C. violaceum can be recovered in high numbers from soil and water.6 Persons affected are typically young (median age: 14 years), and illnesses are frequently diagnosed during the summer.7 Chromobacterium violaceum grows readily on blood agar and MacConkey agar media, and most of the strains produce a pigment called violacein that gives a characteristic purple coloring to its colonies (Figure 2), thus the name of the bacterium.7

Persons infected with C. violaceum typically present with skin or soft tissue infections and illness that rapidly progresses to fatal multiorgan failure; abscesses in visceral organs, including the liver, lung, brain, and spleen are frequently reported.7,8 A literature review in 2011 of 106 patients found C. violaceum bacteremia in 58% of patients; localized abscess in a visceral organ was found in nearly half of all literature review patients, with the liver being the most commonly involved organ.8 Severity of illness in our patient was compatible with C. violaceum infection; however, no skin or soft tissue lesions on physical examination or in the patient’s recent medical history were documented. Because of extensive and primarily pulmonary involvement, we theorize that our patient acquired C. violaceum by inhalation with direct inoculation to the lungs. We investigated potential soil sources at the patient’s home and although C. violaceum was recovered, it differed from the specific isolate that infected our patient with approximately the same SNP distance to epidemiologically unrelated C. violaceum isolates. The fact that the isolates did not match might indicate that the patient acquired the infection in some other environment as there can be large genetic diversity within and between C. violaceum populations collected in different ecosystems,9 or that the original isolate had been replaced by other isolates because the investigation was conducted remote from the time of infection and C. violaceium is highly adaptable and able to respond to its environment.5

Chromobacterium violaceum is an opportunistic pathogen. Infection is strongly associated with CGD10 and, less frequently, glucose-6-phosphate dehydrogenase deficiency.11 Testing for glucose-6-phosphate dehydrogenase was not possible for our patient because of multiple blood transfusions; however, testing for neutrophil activity was markedly abnormal. Chronic granulomatous disease is a primary immunodeficiency characterized by dysfunctional nicotinamide adenine dinucleotide phosphate oxidase activity, making patients with this entity more susceptible to life-threatening bacterial and fungal infections.2 The most common infection site in patients with CGD is the lungs and patients are especially susceptible to catalase-positive organisms; however, catalase-dependent virulence in CGD is not well understood.2 Our patient had a recessive form of CGD, implying that both parents must be carriers and that some siblings might also be carriers. The parents decided to defer their genetic testing after learning that their neutrophil assay was functionally normal. The patient received appropriate antibacterial and antifungal prophylaxis, and the parents decided to postpone the decision regarding a bone marrow transplant.

Treatment of C. violaceum infection is poorly defined. Chromobacterium violaceum is typically susceptible to chloramphenicol, tetracyclines, carbapenems, fluoroquinolones, aminoglycosides, and TMP-SMX but resistant to beta-lactams and vancomycin.8,12 Because of the severity of illness, most patients have received a combination of antibiotics, primarily by IV, and usually for 2–3 weeks. Reports have also indicated that treatment must be prolonged to prevent relapse of the infection.13 On the basis of those experiences and out of an abundance of caution, we chose 3 weeks IV followed by 3 months of dual oral medications. The patient tolerated the treatment and remained infection free.

This case report highlights the importance of considering C. violaceum infection in a patient with rapidly progressing sepsis and multiorgan failure. The report also strengthens the association between C. violaceum and CGD and shows the importance of using WGS to rule out new environmental components as the source of infection. Multiple agencies across disciplines cooperated to ensure the best care possible for this patient. This is a strong example of the collaboration needed between clinical medicine and public health and demonstrates the powerful alliance between laboratory epidemiology and field epidemiology.