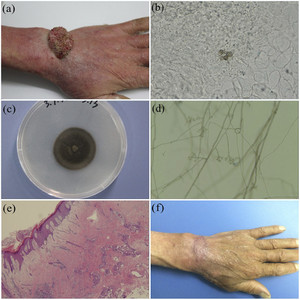 Case Report: Successful Treatment of Chromoblastomycosis Caused by Fonsecaea monophora in a Patient with Psoriasis Using Itraconazole and Acitretin

Chromoblastomycosis is a worldwide chronic subcutaneous infection caused by dematiaceous fungi and clinically characterized by verrucous lesions. Herein, we report a rare case of chromoblastomycosis caused by Fonsecaea monophora in a 60-year-old male carpenter with a 40-year history of psoriasis from Shandong in northern China. A fungal infection coexisting with psoriasis presents a management dilemma. Our patient responded well to combined itraconazole and acitretin therapy and the lesions resolved completely after 1 month of treatment.

A 60-year-old man, a carpenter, was admitted (March 1, 2017) to the outpatient service with an asymptomatic verrucous lesion on the dorsum of the left hand (Figure 1A). The lesion first appeared as a red papule and slowly enlarged over a period of 6 months after sustaining localized trauma. The patient had a 40-year history of psoriasis. The psoriatic lesions were clinically severe. Erythematous patches and plaques with silvery scales were visible on the trunk, lower back, and upper and lower extremities, which caused physical and mental distress. The patient sought evaluation at a local hospital on January 22, 2017, which resulted in a diagnosis of psoriasis combined with a deep mycosis based on the clinical presentation, but negative direct microscopy and culture findings. The patient was treated with itraconazole (400 mg/day for 5 weeks) without apparent therapeutic efficacy. Surgical removal of the abnormal tissue was also considered by a local physician, but was abandoned because a transferable normal skin flap was lacking. At that point, the patient sought evaluation at our hospital. To confirm the diagnosis, skin scraping and crushed tissue smears were visualized in 20% potassium hydroxide, and the presence of brown, irregularly septate, thick-walled cells were observed (Figure 1B). Skin biopsies and skin debris were inoculated onto mycologic culture media. Growth of dark olivaceous filamentous colonies were observed on Sabouraud’s glucose agar at 26°C after a 21-day incubation (Figure 1C). The provisional identification was a Fonsecaea species based on the morphologic characteristics (dematiaceous septate hyphae and ovoid conidia clustered on denticles and arranged in short chains; Figure 1D). The histopathologic examination demonstrated hyperkeratosis and acanthosis of the epidermis and mixed granulomatous inflammation in the dermis (Figure 1E). No conidia or hyphae were seen with periodic acid-Schiff (PAS) staining. The isolated agent was reconfirmed by sequencing of the internal transcribed spacer regions (ITS1 and ITS2) of rDNA, and the sequences were aligned with those in GenBank using Basic Local Alignment Search Tool (BLAST) analysis. The fungus was identified as Fonsecaea monophora based on these analyses. A biochemical evaluation, including the blood glucose level, hepatorenal function, and routine blood testing revealed no abnormalities. Because fungal culture requires a long period of time and there was no definitive evidence to support replacement with another drug, itraconazole was selected for continued treatment before obtaining the results of culture and antifungal susceptibility testing. To avoid the side effects of long-term therapy with high doses of itraconazole and relieve the painful and unbearable psoriatic lesions, we reduced the dose to 200 mg/day and added acitretin (20 mg/day oral administration). Surprisingly, there was significant improvement in the verrucous lesions and the psoriatic lesions recovered gradually after 16 days of combination treatment with itraconazole and acitretin. After 1 month of treatment, the skin lesions had healed substantially (Figure 1F).

Chromoblastomycosis is a sporadic subcutaneous mycotic infection that is endemic worldwide. Chromoblastomycosis is typically caused by a specific group of dematiaceous fungi (usually Fonsecaea pedrosoi, Phialophora verrucosa, and Cladophialophora carrionii); F. monophora is an unusual subcutaneous mycotic pathogen. Fonsecaea pedrosoi and F. monophora are morphologically indistinguishable, but are clinically distinct. For reliable distinction of Fonsecaea species, molecular analysis is necessary1; however, molecular analysis is rarely used for routine fungal identification in most laboratories.

Our patient had a 40-year history of psoriasis and received topical corticosteroids and systemic immunosuppressive agents for therapy. Inflammatory cytokines are overexpressed because of dysregulation of the immune system in psoriasis patients. Several cytokines are involved in host defense mechanisms against pathogens, including fungal species2; however, some psoriasis treatments, including topical corticosteroids, systemic immunosuppressive drugs, and biologic therapy, may further increase the risk for developing fungal infections.3 Psoriatic lesions may compromise the mechanical barrier of the skin and further predispose to fungal infections. Thus, skin abnormalities create an environment in which fungi can thrive, and psoriatic lesions are associated with increased rates of fungal infections.4,5 One study confirmed the possible invasion of psoriatic lesions by dermatophytes and showed that psoriatic skin is infected more commonly than healthy skin in the same individual.6

Coexisting fungal infections and psoriasis present not only a diagnostic challenge, but also a management dilemma. The morphology of lesions overlaps; however, the treatments are distinct and some immunosuppressive agents that are used to treat psoriasis may worsen the rashes of mycotic diseases.7 Although surgical excision is the best nonchemotherapeutic method for the management of chromoblastomycosis, surgical excision can only be used for initial lesions (during the first 1–3 months). Patients with advanced clinical forms of the disease require a long duration of continuous systemic antifungal treatment; even a less commonly prescribed higher daily dose may be beneficial.8 In the current patient, the poor response to 400 mg/day of itraconazole for 5 weeks is difficult to explain, but the patient responded well to oral itraconazole (200 mg/day) combined with acitretin (20 mg/day) within 1 month. We were surprised by the outcome and suspect that compliance was an issue for the 5-week course of itraconazole at 400 mg/day even though the patient insisted that he was compliant. Based on a positive culture, the 5-week course of itraconazole at 400 mg/day should have killed most of the organisms. Paradoxically, the verrucous lesion did not resolve.

The patient described herein failed to respond to conventional antifungal treatment, but combined treatment with low-dose acitretin resulted in a dramatic therapeutic benefit. We suspect that the response was more than a coincidence. In fact, the finding might be due to the antifungal activity of itraconazole and the antiproliferative and anti-inflammatory actions of acitretin. In psoriasis and other disorders of keratinization, acitretin normalizes epidermal cell proliferation and cornification.9 Our search of the literature revealed no reports of acitretin use in patients with chromoblastomycosis. The lesions of the patient reported here were verrucous in appearance and were characterized by hyperkeratosis and proliferation of collagen fibers. Acitretin may have an advantage over other agents because acitretin modulates hyperkeratosis and inhibits proliferation. Moreover, acitretin has been reported to successfully treat patients with infectious diseases, including recalcitrant warts10 and blastomycosis-like pyoderma, which have a cutaneous appearance similar to granulomatous fungal infections.11–13 Although similar therapies have been reported, more comparative studies should be undertaken to confirm the effectiveness of this therapy. Another possibility for the initial therapeutic failure of itraconazole might be absorption, as some formulations are known to be problematic. Although drug interactions between itraconazole and acitretin have not been confirmed, there is evidence that the metabolism of tretinoin can be decreased when combined with itraconazole and the serum concentration of alitretinoin can be increased when combined with itraconazole (https://www.drugbank.ca).

In conclusion, we have reported a rare case of chromoblastomycosis due to F. monophora in a patient with psoriasis. Molecular identification was required to definitively identify the causative species. Coexistence of fungal infections and psoriasis should be considered in treatment regimens to prevent exacerbation, and our case suggests that itraconazole and acitretin combination therapy may be a good therapeutic approach.