Two clusters of randomly located echogenic foci (arrows) are seen within the left epididymis in this screenshot from the patient’s scrotal ultrasound. 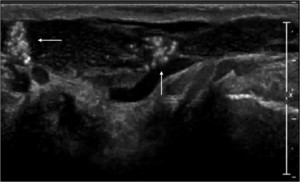 Case Report: Filaria or Megasperm? A Cause of an Ultrasonographic “Filarial Dance Sign”

Bancroftian filariasis can cause genital abnormalities related to chronic inflammation and obstruction of the afferent lymphatic vessels, and may demonstrate a “filarial dance sign” on scrotal ultrasound with mobile echogenic particles observed. We present a patient with a positive “filarial dance sign,” travel within Latin America, and negative filarial serology.

A previously healthy 51-year-old man was referred to the Tropical Disease Unit at our hospital for scrotal pain and a radiographic suspicion of lymphatic filariasis. He was assessed February 21, 2017 with a 4-month history of testicular discomfort. On two occasions, outpatient scrotal ultrasound showed a “filarial dance sign”, with multiple actively moving echogenic foci within a distended portion of the left epididymis. His travel history included trips to Akumal, Mexico (February 2016 for 1 week); British Virgin Islands (January 2015 for 1 week); the Bahamas (2010–2011 for 4.5 months); and San Andres, Colombia (2009 for 1 week).

His medical history was unremarkable and his surgical history was notable for vasectomy 18 years before presentation. There was no previous illness suggestive of acute adenolymphangitis. Genital exam revealed no hydrocele or varicocele, and he had no lymphedema of his lower extremities. His eosinophil count was 0.2 × 109/L on December 28, 2016. Filaria serology performed January 9, 2017, by the National Reference Center for Parasitology (Montreal, Ontario, Canada) was negative (optical density [OD] 0.02 by enzyme-linked immunosorbent assay [OD < 0.2 negative, 0.2–0.3 equivocal, OD > 0.3 positive]). After our assessment, we repeated the ultrasound, which demonstrated identical abnormalities (Figure 1 and Supplemental Video). Diethylcarbamazine (DEC) provocation test was negative. Repeat filaria serology performed on February 10, 2017, by the National Institutes of Health (Bethesda, MD), was 1.7 mcg/mL (normal 0–20 mcg/mL) and Immunoglobulin G4 was undetectable. Spermatic cord aspiration was performed, and cytology demonstrated spermatozoa and dense proteinaceous material with partial calcifications, with no microfilariae or malignant cells seen. At clinical follow-up, his testicular discomfort was lessening and ultimately felt to be a result of epididymal obstruction post-vasectomy.

Lymphatic filariasis is a vectorborne neglected tropical disease caused by W. bancrofti (Bancroftian filariasis), B. malayi, and B. timori.1 A variety of mosquito species transmit the parasites that are endemic in tropics of Africa, Asia, the Pacific Islands, and areas of Latin America. An estimated 120 million individuals are infected globally, many suffering chronic disabling consequences, including elephantiasis, lymphedema, and hydrocele.2 Only Bancroftian filariasis is associated with genital abnormalities that are thought to be related to nests of adult worms residing in the afferent lymphatic vessels, causing chronic inflammation and obstruction.2 Genital complications are common, although one series showed that even among asymptomatic individuals with microfilaremia, half had radiographic abnormalities on scrotal ultrasound.3

Sub-Saharan Africa is the main site of acquisition of filarial infections seen in the GeoSentinel Surveillance Network.4 Our patient’s travel was exclusively within the Americas. Bancroftian filariasis persists in this region, and there are ongoing eradication campaigns in four high-burden countries: Brazil, Haiti, Dominican Republic, and Guyana. Based on the 2015 World Health Organization report, British Virgin Islands and Colombia have an uncertain status with respect to the ongoing presence of lymphatic filariasis, whereas the disease is not present in Mexico or the Bahamas.5

Although there is a large burden of disease in residents of endemic regions, infection in short-term travelers is rare. Two cases of Bancroftian filariasis in the GeoSentinel Surveillance Network were identified in travelers from non-endemic regions, with each individual having spent over 6 months in the endemic area.4 However, in rare cases, acquisition has been demonstrated from trips as short as 7 days.6

Lymphatic filariasis can be confirmed by visualization of the parasite or detection of its antigens or nucleic acid.2 Observation of microfilariae on a thick blood film with Giemsa or hematoxylin staining is a readily available method of detection. Wuchereria bancrofti has known periodicity with the highest circulating levels of microfilariae occurring between 2200 and 0400 hours.2 To circumvent the need for nocturnal blood collection, a DEC provocation test (2 mg/kg tablet given 30–45 minutes before blood draw) can be performed to stimulate the release of microfilariae into the peripheral blood. The sensitivity of this daytime test was comparable with night blood examination.7 This test should be avoided in patients at risk for co-infection with Onchocerca volvulus. Serology is limited by cross-reactivity with other helminths and is unable to distinguish past from current infection.2 Inclusion of IgG4 testing is more specific and correlates more strongly with active infection.2 Microfilariae can be detected in fluid from hydroceles and other bodily fluid in rare cases but were not seen in the spermatic cord aspirate from our patient. Although antigen detection is now the preferred method for diagnosis, these tests are not readily available in our practice setting.1

The ultrasonographic “filarial dance sign” was described by Amaral and colleagues in 1994 and initially thought to be pathognomonic for lymphatic filariasis.3 The movements were thought to be generated by echogenic “filarial worm nests” within dilated lymphatic vessels.3 In male patients with microfilaremia, this finding has been demonstrated in 37–100% of cases.8 However, observations in several case reports from non-endemic areas have identified positive “filarial dance sign” among patients with no exposure to the parasites.8–10 Similar to our patient they commonly have undergone vasectomy or have a urologic condition leading to impaired drainage of the vas deferens. The authors postulated that the motion may instead be related to clumps of agglutinated spermatozoa (“megasperm”) within dilated ducts, which was consistent with the cytologic findings from our patient’s spermatic cord aspirate.

Our patient was referred for assessment of lymphatic filariasis based on a positive “filarial dance sign” on scrotal ultrasound in the context of travel in Latin America. Infectious Diseases specialists should be aware that there is a non-infectious differential for this radiographic finding, and should inquire about prior urologic surgeries and disorders. Although this patient had a possible exposure, his trips were for short durations to areas of the Americas with low or no risk for disease. Although the development of Bancroftian filariasis typically requires prolonged residence in an endemic area, transmission has been documented in short-term travelers and should be considered in patients with a compatible clinical illness.