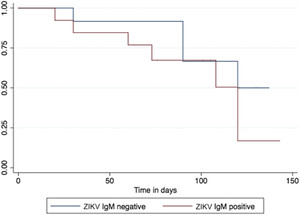 Seizures as a Complication of Congenital Zika Syndrome in Early Infancy

Zika virus transmission in Brazil was linked to a large outbreak of microcephaly but less is known about longer term anthropometric and neurological outcomes. We studied a cohort of infants born between October 31, 2015, and January 9, 2016, in a state maternity hospital, followed up for 101 ± 28 days by home visits. Microcephaly (< 2 standard deviations, Intergrowth standard) occurred in 62 of 412 (15%) births. Congenital Zika syndrome (CZS) was diagnosed in 29 patients. Among CZS patients, we observed a significant gain in anthropometric measures (P < 0.001) but no significant gain in percentile for these measures. The main neurological outcome was epilepsy, occurring in 48% of infants at a rate of 15.6 cases per 100 patient-months, frequently requiring multiple anti-seizure medications. The cumulative fatality rate was 7.4% (95% confidence interval: 2.1–23.4%). Health-care professionals should be alerted on the high risk of epilepsy and death associated with CZS in early infancy and the need to actively screen for seizures and initiate timely treatment.

In late 2015, a large outbreak of microcephaly occurred in Brazil1,2 during which a causal association between Zika virus (ZIKV) exposure in gestation and severe birth defects was identified.3 Congenital Zika syndrome (CZS)2 among newborn infants predominantly affects the central nervous system and is associated with ventriculomegaly, brain calcifications, cortical migrational abnormalities, and cerebellar hypoplasia and characteristic ocular lesions.3–5 Although prognosis of infants with CZS is expected to be poor, there is limited evidence to date on survival and development of sequelae after birth.6

The present study was approved by the local ethics research committee and mothers gave informed consent. We identified 62 (15%) infants with microcephaly (head circumference < −2 standard deviation [SD], Intergrowth reference) among 412 births that occurred between October 31, 2015, and January 9, 2016, in a state maternity referral hospital in the city of Salvador in Northeast Brazil. Severe disproportionate microcephaly was defined when the head circumference was less than 3 SD and other anthropometric measurements > 2 SD on the Intergrowth standard. Laboratory testing for ZIKV was performed by immunoglobulin-M enzime-linked Immunosorbent assay (IgM ELISA) serologic assay of cord blood. Because these were initial outbreak cases, mothers were not tested for Zika infection during pregnancy. Other toxoplasmosis, rubella, cytomegalovirus, herpes simplex and sifilis (TORCH) infections and dengue were excluded by appropriate ELISA serological tests. Among the 40 infants whose mothers were residents of Salvador, 29 (73%) were found to have clinical and radiological evidence for CZS.2 Of the 29 infants, 15 (52%) were laboratory-confirmed cases, which had anti-ZIKV–specific IgM antibodies in their cord blood. Although the majority of the 29 CZS cases had severe and disproportionate microcephaly (15 cases, 52%), all infants survived the initial hospitalization and were discharged home after a median of 12 (range, 1–67) days.

We performed follow-up home visits and outpatient evaluations for 27 infants with CZS at a mean of 101 ± 28 days of life and two infants were lost to follow-up. The cumulative fatality rate was 7.4% (95% confidence interval: 2.1–23.4%). The 25 surviving infants had a significant increase (P < 0.001) in the head circumference, weight, and length between the time of birth and follow-up evaluation. However, we did not observe a significant increase in percentiles for the head circumference, weight, and length during this period. There was no significant difference between laboratory-confirmed and unconfirmed cases with respect to their anthropometric measurements at birth or follow-up.

Seizures were the major complications among CZS infants in the first 4 months of life. Mothers reported seizure-like movements among 15 (60%) of the 25 surviving infants who were not lost to follow-up. Neuropediatric evaluation and review of home video recordings confirmed the presence of seizures in 12 (48% of 25) infants, whereas the remaining three infants had non-epileptic movements such as choking.

Seizures appeared to have occurred earlier and at a higher rate when compared with other TORCH etiologies.7 The overall rate of epilepsy was 15.6 per 100 patient-months (Figure 1) and was not significantly different between laboratory-confirmed and unconfirmed cases (P = 0.306). The median time to seizure onset was 108 days (interquartile range: 67–195). Epileptic spasms and generalized tonic–clonic seizures accounted for 40% and 60%, respectively, of confirmed epilepsy (Table 1). Electroencephalography showed abnormal baseline rhythm in all infants with documented epilepsy, focal spikes in three, generalized spikes in two, and burst-suppression pattern in one, indicating that infants with CZS-associated epilepsy had severe encephalopathy, similar to what has been reported for CZS infants without epilepsy.8

Our findings serve as an alert on the high potential risk of epilepsy and death associated with CZS in early infancy and the need to actively screen for seizures and initiate timely treatment. Seizures were the major cause of hospitalization and emergency room visits among our cases. At the time of home visit (median, 99 days), seven (47%) of the 15 children with seizures were not identified as having epilepsy and receiving indicated therapy.

Study infants had microcephaly as part of their presentation of CZS, so our findings may not be generalizable to infants who were exposed to ZIKV in utero and did not develop microcephaly. Yet, despite the severity of their central nervous system manifestations, our infants were able to feed and demonstrate significant weight gain in the first 100 days of life, albeit not enough for catch-up growth. As a cautionary note, the transition between reflex and voluntary swallowing occurs at 4 months of life. Infants with severe CZS may, therefore, be at high risk for airway infections, malnutrition, and poor growth as they advance in age. To allow for complete follow-up with home visits, we restricted our sample to residents of the city of Salvador, so some of our findings may not generalize to populations residing in rural areas of the state.