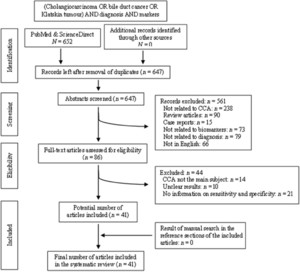 Biomarkers for the Diagnosis of Cholangiocarcinoma: A Systematic Review

Cholangiocarcinoma (CCA), a malignant tumor of the bile duct, is a major public health problem in many Southeast Asian countries, particularly Thailand. The slow progression makes it difficult for early diagnosis and most patients are detected in advanced stages. This study aimed to review all relevant articles related to the biomarkers for the diagnosis of CCA and point out potential biomarkers. A thorough search was performed in PubMed and ScienceDirect for CCA biomarker articles. Required data were extracted. A total of 46 articles that fulfilled the inclusion and had none of the exclusion criteria were included in the analysis (17, 22, 3, 4, and 1 articles on blood, tissue, bile, both blood and tissue, and urine biomarkers, respectively). Carbohydrate antigen 19-9 (CA19-9) and carcinoembryonic antigen (CEA), either alone or in combination with other biomarkers, are the most commonly studied biomarkers in the serum. Their sensitivity and specificity ranged from 47.2% to 98.2% and 89.7% to 100%, respectively. However, in the tissue, gene methylations and DNA-related markers were the most studied CCA biomarkers. Their sensitivity and specificity ranged from 58% to 87% and 98% to 100%, respectively. Some articles investigated biomarkers both in blood and tissues, particularly CA19-9 and CEA, with sensitivity and specificity ranging from 33% to 100% and 50% to 97.7%, respectively. Although quite a number of biomarkers with a potential role in the early detection of CCA have been established, it is difficult to single out any particular marker that could be used in the routine clinical settings.