Map of Koulikoro district with the two study villages indicated by black dots. The inset shows the location of the district (depicted by a black square) within the country of Mali. This figure appears in color at www.ajtmh.org. 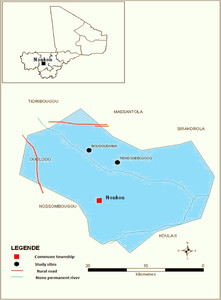 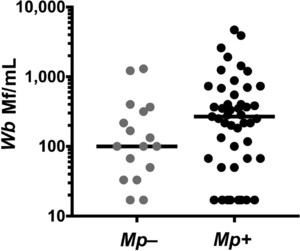 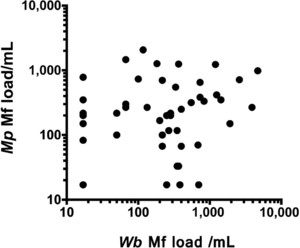 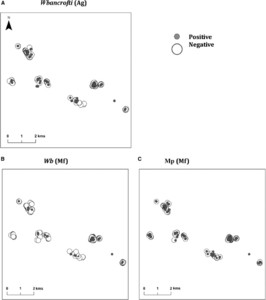 Although Wuchereria bancrofti (Wb), the causative agent of lymphatic filariasis, is endemic throughout Mali, the prevalence of Wb microfilaremia (Mf) can vary widely between villages despite similar prevalence of infection as assessed by circulating antigen. To examine this variation, cross-sectional data obtained during screening prior to an interventional study in two neighboring villages in Mali were analyzed. The overall prevalence of Wb, as assessed by Wb CAg (circulating antigen), was 50.3% among 373 participants, aged 14-65. Wuchereria bancrofti Mf-positive and negative individuals appeared randomly distributed across the two villages (Moran’s I spatial statistic = -0.01, Z score =0.1, P>0.05). Among the 187 subjects positive for Wb CAg, 117 (62.5%) had detectable Mansonella perstans microfilaremia (Mp Mf) and 64 (34.2%) had detectable Wb microfilaremia. The prevalence of Mp microfilaremia was 73.4% in the Wb Mf-positive group (as compared to 56.9% in the Wb Mf-negative group; p=0.01), and median Wb Mf load was increased in co-infected subjects (267Mf/ml vs 100 Mf/ml; p<0.001). In multivariate analysis, village of residence, Mp Mf positivity and gender were significantly associated with Wb Mf positivity. After controlling for age, gender, and village of residence, the odds of being Wb Mf positive was 2.67 times higher in Mp positive individuals (95% confidence interval [1.42–5.01]). Given the geographical overlap between Mp and Wb in Africa, a better understanding of the distribution and prevalence of Mp could assist national lymphatic filariasis control programs in predicting areas of high Wb Mf prevalence that may require closer surveillance.

Lymphatic filariasis (LF) is a chronic neglected tropical disease that is endemic in 72 countries worldwide, including Mali.1,2 Lymphatic filariasis is associated with significant morbidity due primarily to lymphedema and hydrocele1,3 and has been targeted by the World Health Organization and its partners for elimination by 2020.1 The strategies for elimination are based on two pillars, community-based mass drug administration (MDA) to interrupt transmission through clearance of microfilaremia (Mf) over the lifespan of the adult worms (∼6 years) and morbidity management (hydrocele and lymphedema).1 Known risk factors for Wuchereria bancrofti (Wb) infection include environmental,2,4 sociocultural, and demographic (age and gender) factors.5,6 For example, in Mali, the prevalence of Wb circulating antigen (Wb CAg), a marker of active infection, ranged from 18.6% in the south to 1% in the north, the latter being desertous and thereby ecologically less suitable for Wb transmission.7 These factors affect endemicity and thus impact control programs.

Microfilaremia is the main factor that drives the endemicity level in a given area and can be used as a surrogate for transmission assessment before and during MDA. By definition, if microfilariae (mf) are found in the peripheral blood, fertile adults must be viable and drug distribution must continue if transmission is to be interrupted.6,8 Factors other than drug coverage may have an impact on Wb Mf load and thereby alter the efficacy of MDA at the individual or community level. These factors include spatial clustering, coincident infection with other organisms, bed net use and occupation.9–11 To determine the effect of these factors on Wb prevalence and Mf levels within a single transmission area, data obtained before an interventional study12 in two neighboring villages (Tieneguebougou and Bougoudiana) were compared.

The study was conducted in the villages of Tieneguebougou and Bougoudiana, ∼ 105 km northwest of Bamako, Mali (Figure 1). These villages are not endemic for onchocerciasis. They are in a northern savannah area with an average annual rainfall of 589.4 mm. The total population at the time of the data collection was 1,945 for Tieneguebougou and 991 for Bougoudiana.

The study was approved by both the ethical review committee of the Faculty of Medicine, Pharmacy, and Dentistry at the University of Bamako (Bamako, Mali) and the Institutional Review Board of the National Institutes of Allergy and Infectious Diseases (Bethesda, MD). Before the launch of the study, community permission was obtained from village elders after a series of explanatory meetings. Individual written informed consent was obtained from all subjects (or from legal guardians for subjects less than 18 years of age).

A cross-sectional study design was used to obtain data as part of the screening for participation in an interventional study of MDA dosing regimens (NCT00339417).12 All study activities were conducted at the primary school in Tieneguebougou or in two rooms provided by the chief of the village in Bougoudiana. Consenting participants underwent an extensive history and physical examination and blood collection. Data collected included demographics, related signs and symptoms of Wb infection, previous participation in MDA campaigns, and bed net utilization.

Wuchereria bancrofti infection was defined by the presence of Wb Mf on a calibrated thick smear of blood collected between 10 pm and 2 am13 or a positive test for circulating Wb Ag (TropBio, Townsville, Australia) by enzyme-linked immunosorbent assay.14 For each participant, three Giemsa-stained slides, each containing 20 μL of whole blood collected at night, were examined for the presence of Mf. Counting of Wb and Mansonella perstans (Mp) Mf was performed microscopically at ×40 magnification. Speciation was confirmed based on size and morphology at ×100 magnification under oil-immersion. Each slide was read by two independent readers. A third reader was used to resolve discrepancies of ≥ 10%. The final parasite load reported for each participant was the average of the Mf counts obtained. Wuchereria bancrofti CAg was detected in serum by ELISA (TropBio) based on the manufacturer’s protocol. A value of > 32 Units/mL was considered positive.

The geographical coordinates (latitude and longitude) of each participant’s household were determined using a global positioning system device. To examine the magnitude and geographical distribution of Wb Mf load throughout the two villages, the household coordinates and all related data were compiled in a database and mapped using the geographic information system (GIS) software ArcGIS 9.2 (Esri, Redlands, CA). Spatial analysis of Wb load was examined using ArcGIS Spatial Analyst and statistics tools (Esri).

Unless stated otherwise, medians were used to describe central tendency. Differences between groups were assessed using the Mann–Whitney U test. Bivariate analyses was performed to explore the associations between Wb infection and each of the other variables including Mp infection, prior participation in MDA, the use of bed nets, age, gender, and villages of residence. Logistic regression was then performed to control for confounding factors. In this logistic regression, Wb Mf infection was the outcome of measure and Mp infection primary risk factor with age, gender, and village of residence as secondary cofactors. Spearman correlation was used to measure the relationship between two continuous variables. The Moran’s I statistic was used to test for spatial autocorrelation patterns, that is, clustered, dispersed, and random.

Characteristics of the study population

Despite comparable infection rates (as assessed by CAg positivity in Tieneguebougou and Bougoudiana 55.4% (107/195) and 44.9% (80/178), respectively; P = 0.05 Fisher’s exact test), village of residence was also significantly associated with Wb Mf status (OR = 2.52 [1.41–4.51]). This association was not due to differences in Mp Mf, age, gender, or bed net use between the two study villages (Table 3). Moreover, there was a relatively even distribution of Wb Mf positivity across the two villages studied with 23.2% (45/149) versus 10.7% (19/159) Wb Mf positive, respectively, and geospatial analyses failed to detect any systematic spatial association between Mf-positive and Mf-negative individuals (Moran’s I spatial statistic; MI = −0.01, Z score = 0.1, P > 0.05) (Figure 4). Although antifilarial drug use was not identified as a risk factor for Wb Mf positivity in the univariate or multivariate analyses, there was a small but statistically significantly higher frequency of antifilarial drug use in Bougoudiana (59.5% versus 47.4% in Tieneguebougou; P = 0.02) (Table 3).

Understanding the factors that affect Wb Mf at the individual and local levels can help identify regions within an endemic district that are likely to have higher local transmission and may require closer surveillance. The present study examined some of these factors in two neighboring villages in an area endemic for Wb with an overall CAg prevalence of > 50%. Despite similar infection prevalences (rates of Wb CAg positivity) between the two villages, Wb microfilarial prevalences were significantly different, suggesting a role for factors other than ecology in Wb Mf prevalence in this setting. Whereas village of residence, Mp Mf positivity, and age > 38 years were significantly associated with Wb mf positivity in univariate analysis, only Mp Mf and village of residence remained significant in multivariate analysis. Gender was not a significant risk factor for Wb Mf positivity in univariate analysis but proved significant in the multivariate analysis, consistent with prior data demonstrating an increased prevalence of Mf in males.15,16

An association between Wb infection and Mp Mf at the individual level was reported previously in a different region of Mali17 but not seen in a similar study in Uganda.4 The reason for this discrepancy may be the presence of different strains of Mp in different parts of Africa, as was suggested in studies from Kenya.18,19 In fact, the Uganda Mp strains appear to have lost the Wolbachia endosymbiont, whereas in Mali, Gabon, and Cameroon, Mp has been demonstrated to contain Wolbachia, both directly by polymerase chain reaction and indirectly as evidenced by treatment response to doxycycline.20,21

In the present study, Wb Mf load was increased in subjects with concomitant Mp infection and correlated with Mp Mf load at the individual level. A positive association between Mp and Wb Mf densities was also reported in the Ugandan study.4 Similar relationships have been seen in other filarial coinfections, including loiasis and onchocerciasis,22 suggesting common regulatory mechanisms controlling microfilarial numbers between species.

Because both Mp and Wb are spread by insect vectors that bite unprotected skin, inhabitants of endemic areas who engage in activities that put them at increased risk for vector bites are at high risk of acquiring both Wb and Mp infection.4 This could lead to clustering of infection, as has been described in LF.18 Although Moran’s I spatial statistic failed to detect significant spatial correlation or clustering between Mp and Wb in this study, this could have been due to the relatively small sample size.

Surprisingly, neither Wb infection rates nor Mf density were significantly reduced by prior MDA-based antifilarial drug treatment or bed net use, which has been shown to synergize with MDA in eliminating LF.17 Nevertheless, the significantly increased history of MDA participation in Bougoudiana as compared with Tieneguebougou is consistent with a role for antifilarial drug therapy in reducing Wb Mf levels at the community level. The lack of significance in the univariate and multivariate analysis may be due to the relatively small impact of two MDA rounds on LF Mf, as observed in a previous study in a highly endemic area in Mali where as many as six MDA rounds were required to decrease LF Mf to the recommended threshold levels for elimination.23

In conclusion, in multivariate analysis, Wb Mf was associated with the village of residence, the presence of Mp Mf, and gender in two neighboring rural villages in Mali. Given the geographical overlap between Mp and Wb in Africa,18 a better understanding of the distribution and prevalence of Mp could assist national LF control programs in predicting areas of high Wb mf prevalence that may require closer surveillance.