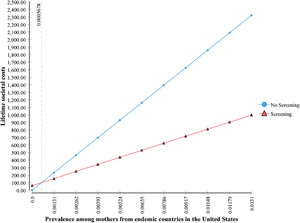 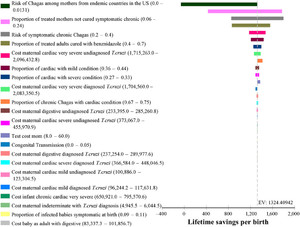 Chagas disease, caused by Trypanosoma cruzi, is transmitted by insect vectors through transfusions, transplants, insect feces in food, and from mother to child during gestation. Congenital infection could perpetuate Chagas disease indefinitely, even in countries without vector transmission. An estimated 30% of infected persons will develop lifelong, potentially fatal, cardiac or digestive complications. Treatment of infants with benznidazole is highly efficacious in eliminating infection. This work evaluates the costs of maternal screening and infant testing and treatment of Chagas disease in the United States. We constructed a decision-analytic model to find the lower cost option, comparing costs of testing and treatment, as needed, for mothers and infants with the lifetime societal costs without testing and the consequent morbidity and mortality due to lack of treatment or late treatment. We found that maternal screening, infant testing, and treatment of Chagas disease in the United States are cost saving for all rates of congenital transmission greater than 0.001% and all levels of maternal prevalence above 0.06% compared with no screening program. Newly approved diagnostics make universal screening cost saving with maternal prevalence as low as 0.008%. The present value of lifetime societal savings due to screening and treatment is about $634 million saved for every birth year cohort. The benefits of universal screening for T. cruzi as part of routine prenatal testing far outweigh the program costs for all U.S. births.