Management of 35 infected women during pregnancy. 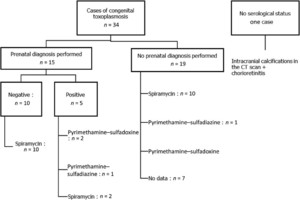 Congenital Toxoplasmosis in Tunisia: Prenatal and Neonatal Diagnosis and Postnatal Follow-up of 35 Cases

Congenital toxoplasmosis (CT) results from transplacental passage of Toxoplasma gondii to the fetus during acute maternal infection. Our study aims to report clinical and biological patterns of 35 cases of CT diagnosed at the department of the Parasitology of the Pasteur Institute of Tunis and to access the performance of prenatal and early postnatal diagnosis techniques. Serological screening of maternal infection was performed by Immunoglobulin (Ig) M and IgG detection and IgG avidity determination. Prenatal diagnosis was based on both Toxoplasma DNA detection in the amniotic fluid and monthly ultrasound examinations. polymerase chain reaction analysis on amniotic fluid, performed only in 15 cases, detected Toxoplasma’s DNA in five cases (33.3%). Ultrasound examination did not reveal any morphological abnormalities. Thirty newborns had serological criteria of Toxoplasma infection. Congenital toxoplasmosis diagnosis was confirmed in 23 cases (76.6%) by immunoblot. Among the 35 born-infants, five (14.3%) were symptomatic: three had chorioretinitis at the first clinical ocular examination, one had neurological symptoms (seizures) with positive parasite DNA in cerebral spinal fluid, and one had both ophthalmological and neurological damages— chorioretinitis and intracranial calcifications in the computed tomography scan. Thirty-four of 35 infected children were treated with pyrimethamine–sulfadiazine combination. Four (11.7%) of the treated infants showed abnormal hematological values because of the treatment side effect. Serological rebound was observed in seven infants. A screening program and a diagnostic algorithm in pregnant women should be implemented in Tunisia to improve the follow-up of seronegative ones and to prevent CT cases.

Toxoplasmosis is a cosmopolitan infection caused by the protozoa Toxoplasma gondii (T. gondii). When immunocompetent people become infected, the disease is generally asymptomatic. However, during pregnancy, transplacental transmission of T. gondii may lead to severe congenital infections, including in utero abortion, fetal death, or neurological or ocular damage of the fetus.1 This emphasizes the need for an early screening for toxoplasmosis in pregnant women to determine their serological status.

In Tunisia, toxoplasmosis represents a common parasitic infection with an overall prevalence estimated at 58.4%.2 Toxoplasmosis seroprevalence in pregnant women ranges from 39.3% to 45.6%.3,4 Consequently, an important proportion of Tunisian women in childbearing age are susceptible to infection during pregnancy, which makes congenital toxoplasmosis (CT) risk particularly high.2 In addition, the rate of toxoplasmic infection during pregnancy ranges from 1.3% to 3.8% according to some Tunisian studies.3,4 A serological screening for toxoplasmosis during the first antenatal care visit is recommended but not mandatory.

Our study aim was to report the clinical, diagnostic, and therapeutic characteristics of 35 congenital toxoplasmosis cases, diagnosed and followed up at the Pasteur Institute of Tunis, to improve CT management.

A retrospective study was conducted between January 2005 and December 2016 at the Department of Parasitology of the Pasteur Institute of Tunis. It included 6,074 pregnant women consulting for a Toxoplasma infection and routine serological screening, pregnant women with suspected acute infection, infants born to women infected during pregnancy, and newborns with suspected clinical manifestations of CT.

It consisted in testing the newborn’s sera for IgM and IgG anti-Toxoplasma antibodies by using the ELISA kit (PlateliaToxo IgG IgM, Bio-Rad) and for specific IgM by the immunosorbent agglutination assay (ISAGA) (Toxo ISAGA IgM, BioMérieux, Marcy l'Etoile, France). An immunoblot assay (Western blot Toxo IgG IgM, LDBIO Diagnostics, Lyon, France) was applied for the comparison of IgG and IgM immunological profiles in mother–child pairs and for the follow-up of the infant’s blood.

The first serological investigation included an IgG and IgM screening by ELISA and a comparative western blot test for specific IgG and IgM analysis from paired mother–newborn.

During the follow-up, sera were screened for IgG (by ELISA), for IgM (by ELISA and ISAGA), and for IgG and IgM by comparative immunoblot according to the previous results. Congenital toxoplasmosis biological diagnosis algorithm after birth is presented in Figure 1. The immunoblot testing after birth is limited to 3 months for IgG and 1 month for IgM.

A clinical evaluation including ocular examination and cranial ultrasound was systematically undertaken for all infants.

A CT case was defined as a fetus, a newborn, or an infant aged less than 1 year with at least one of the following conditions:

Thirty-five newborns with confirmed CT were retained for analysis.

After the first week of life.

PCR analysis was performed only for 15 cases. It detected Toxoplasma DNA in five cases (33.3%).

Ultrasound examination was performed in all cases and revealed no morphological abnormalities. Pregnant women management is described in Figure 2.

Postnatal serological diagnosis was not required for the five newborns with positive PCR results.

Serological criteria of Toxoplasma infection were verified in the 30 remaining newborns.

Congenital toxoplasmosis diagnosis was confirmed by the detection of neosynthesized anti-Toxoplasma antibodies by western blot in 23 cases (76.6%): specific IgM and IgG, only IgG and only IgM in 12, 3, and 8 cases, respectively. Seven neonates had positive western blot at birth and 16 in the first month of life.

Congenital toxoplasmosis diagnosis relied on IgM antibodies detection in five cases (one by ISAGA and four by ELISA), within the first 2 weeks of life in four cases, and at day 45 of life in one case.

In the last two CT cases, the infection was discovered later (> 3 months), although following the persistent IgG (patient nos. 3 and 18). Both infants had no specific IgM at birth (Table 1, Figure 3).

Only five of the 35 CT cases (14.3%) were symptomatic: three had chorioretinitis at the first fundus clinical examination, one had neurological symptoms with positive parasite DNA in cerebral spinal fluid, and one had both ophthalmological and neurological damages: chorioretinitis and intracranial calcifications in the computed tomography scan (Table 1). The mother of this last infant was not screened for Toxoplasma infection during pregnancy.

After birth, 34 of the 35 infected children were treated with a combination of pyrimethamine and sulfadiazine for 12 months.

Among the 34 treated infants, four (11.8%) showed an abnormal hematological value: neutropenia with a neutrophil count < 1,000/mm3 was observed in three cases (8.8%) and thrombocytopenia in one case. Such abnormalities led to treatment discontinuation for 1 week in all cases.

The clinical follow-up did not show any eye lesions worsening for the four infants with chorioretinitis or new ophthalmological lesions for the other infants. The follow-up duration for each case is reported in the table.

A sudden rise of the anti-toxoplasmic antibodies after the end of the treatment course, also known as serological rebound, was observed in seven infants without any ophthalmological abnormalities or aggravation of preexisting lesions. Anti-toxoplasmic treatment was prescribed during three additional months for two infants.

Prenatal diagnosis is an essential step to confirm fetus infection and to start promptly an adequate treatment.5 In our study, PCR analysis on amniotic fluid was performed only for 15 among the 35 CT cases and revealed positive in 33.3%. The remaining 20 pregnant women either did not consent or seroconverted late in the third trimester. PCR techniques used in this study detects less than 1–10 parasites per sample, which corresponds to a positive threshold, similar to those of the widely used PCR assays.6 The low sensitivity observed in our series (10 infants with negative PCR and positive results at birth) could be explained in some cases by non-respect of optimal amniocentesis conditions (18 weeks of amenorrhea and at least 4 weeks after the estimated date of seroconversion). Other possible explanations for the false-negative results are late transplacental parasite transfer or low fetal parasite burden.6 Of the five confirmed fetal infection cases by PCR, only three women have received a curative treatment. This could be explained by the unavailability of such molecules in some health centers.

Congenital toxoplasmosis diagnosis was retained in 30 of 35 cases according to fetal infection serological criteria. Western blot allowed the diagnosis in 23 cases (76.6%). In fact, the immunoblot is a sensitive rapid assay that detects specific antibodies as described in other studies.7–9 The positivity of western blot assay was observed in the first 2 months of life, which provides an early diagnosis in babies for whom antenatal diagnosis was negative or not carried out because the other serological tests (ELISA or ISAGA assays) could not detect IgM antibodies at birth. Nevertheless, as reported in other studies,10,11 IgM detection remains useful mainly in newborns of women infected lately during their pregnancy as observed in cases no 15, 22, 24, 27, and 32. In our last two cases (patients nos. 3 and 18) with negative serological tests (western blot and ISAGA IgM), the stabilization of IgG during follow-up allowed the diagnosis of CT. This suggests that serological monitoring of newborns should be maintained until maternal IgG disappear.1

Because of variable sensitivity of the different available serological methods, many authors recommend the combination of different techniques during a 1-year follow-up to cumulate their sensitivities.12

Systematic examination at birth permitted chorioretinitis detection in four cases and neurological symptoms observation in two cases. The low neurological damage prevalence in our study may be because of the antiparasitic treatment received during pregnancy13 or to the late transmission. However, no data proved that PMT–SFD combination is more efficient than spiramycin.14 The detecting of both neurological and ophthalmological damages in the newborn of the woman who did not undergo serological screening must underline the contribution of both serological screening and antiparasitic treatment in preventing severe CT forms.

Serological rebounds were observed in seven cases with no associated clinical manifestations. Some hypotheses support that such increase of antibodies is induced by immunological cells’ activities but without any correlation with clinical events.15 Nevertheless, ocular and neurological examination must be systematically undertaken to ensure the absence of clinical or infra-clinical lesions.15

A screening program and a diagnostic algorithm in pregnant women should be implemented in Tunisia to improve the follow-up of seronegative ones and to prevent CT cases. The high performance of Western blot assay and the sensitivity of PCR methods are providing an early detection of toxoplasmic infection in infants. Initial negative serological results, in some cases, should not exclude the CT diagnosis, and clinical and serological follow-up have to be maintained until 12 months of age.