Demographic data of the outbreak. (A) Map of the Pos Kemar Orang Asli settlement showing the location of the five villages (I–V) with the highest number of cases. The size of the orange circles (big to small) next to the roman numerals denotes the relative number of cases (descending order). (B) Graphs showing the number of cases diagnosed in each week of the year from November 16, 2016 to April 20, 2017 in the five villages (I–V). The attack rate in percentage (number of cases/number of population) is shown on the left of each graph. The arrow on the x-axis at the bottom denotes the end of the outbreak. (C) Breakdown of the cases into age and gender. The bar chart on the left shows the total number of cases from November 16, 2016 to April 20, 2017, whereas the remaining graphs show the total number of cases during and after the outbreak period until April 20, 2017, respectively. The numbers above the bars denote the median asexual parasite number/sexual parasite number per microliters of blood. I: Kampung (Kg.) Senangit; II: Kg. Ralak; III: Kg. Rantau; IV: Kg. Akei; and V: Kg. Lediau. This figure appears in color at www.ajtmh.org. 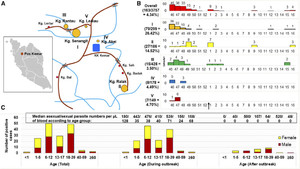 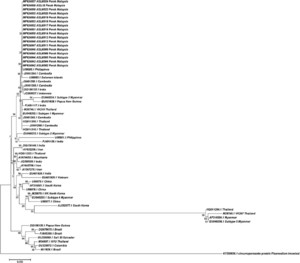 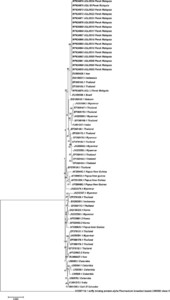 Importance of Proactive Malaria Case Surveillance and Management in Malaysia

Although Plasmodium vivax infections in Malaysia are usually imported, a significant autochthonous outbreak of vivax malaria was detected in a remote indigenous (Orang Asli) settlement located in northern peninsular Malaysia. Between November 2016 and April 2017, 164 cases of P. vivax infection were detected. Although 83.5% of the vivax cases were identified through passive case detection and contact screening during the first 7 weeks, subsequent mass blood screening (combination of rapid diagnostic tests, blood films, and polymerase chain reaction [PCR]) of the entire settlement (N = 3,757) revealed another 27 P. vivax infections, 19 of which were asymptomatic. The mapped data from this active case detection program was used to direct control efforts resulting in the successful control of the outbreak in this region. This report highlights the importance of proactive case surveillance and timely management of malaria control in Malaysia as it nears malaria elimination.